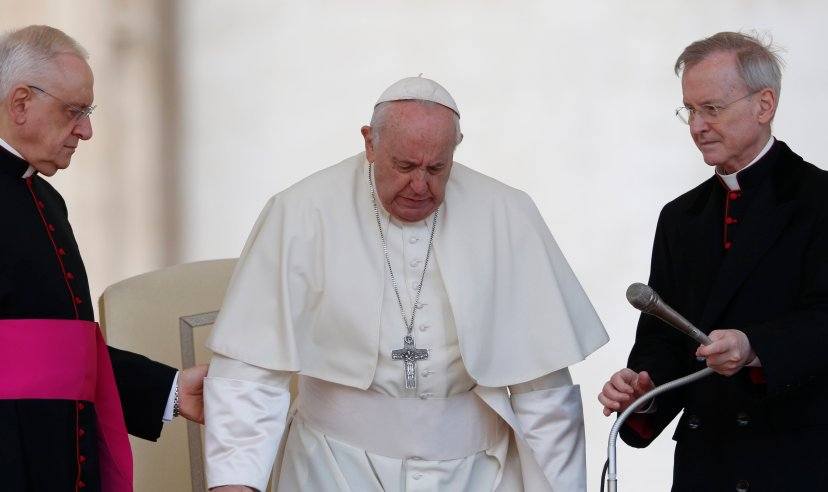 ROME — Pope Francis will have therapeutic injections to try to alleviate the pain in his right knee, he told an Italian newspaper.

“I have a torn ligament; I will have a procedure with injections and we will see,” he said in an interview published May 3 in Corriere della Sera.

“I’ve been like this for a while now, I can’t walk,” he said. “Once upon a time, popes would go around on the ‘sedia gestatoria,'” a ceremonial throne with long handles carried on aides’ shoulders that was used until 1978.

“You also need a bit of suffering, of humiliation …” he said.

The 85-year-old pope apologized to the two reporters for not being able to stand to greet them, “the doctors told me I have to stay seated because of my knee.”

The interview took place in one of the meeting rooms on the first floor of the pope’s residence, where the pope was forced to hold an audience May 2 with members of the International Federation of Catholic Pharmacists. “This audience should have been in the Apostolic Palace, but because of my knee, it is here,” he told them.

Pope Francis has canceled several appointments and meetings the past few months because of his doctor’s orders to rest. He has stayed seated during recent audiences and meetings.

During an audience with pilgrims from Slovakia in the Paul VI audience hall April 30, the pope said he would greet them, “but there is a problem: this leg isn’t right, it doesn’t work, and the doctor has told me not to walk. I’d like to … but this time I must obey the doctor!”

“It is a humiliation, but I offer it for your country. Thank you!” he said, after explaining they could climb the steps to the stage for a greeting.

The interview in May was not the first time the pope has spoken publicly about swelling and a torn ligament in his knee.

He told La Nación April 22 that the torn ligament makes it difficult for him to walk and prevents him from standing for long periods of time.

“It will pass,” he said in that interview. However, he said at the time he was refusing injections and only treating it with ice and pain relievers.

He told La Nación that doctors assured him the problem would go away but that “ligament recovery is slow at this age.”

Knee injections typically deliver medication — which could be cortisone, hyaluronic acid, platelet-rich plasma or other kinds of therapies — directly inside the knee joint capsule.

Posted by Deacon Mike Talbot at 10:53 AM