First Saint of the Day for September

I love my Saints of the day and of course tomorrow being the first day of the month I hated the idea of not doing something.

The first Saint for September is St Giles.

Here is his story:


https://www.franciscanmedia.org/saint-giles/
Posted by Deacon Mike Talbot at 9:19 PM No comments:

I have new equipment at the house to try and restore my internet connection.  I’m actually not sure if I want to tackle this tonight.  Today was a tough day.  An old friend who I just reunited with last Sunday has died.  I plan to do something more detailed/more nobler for my friend Alan.  Today was also last day at work day before my Labor Day 10 day vacation.  It was a busy get it done kind of day.  Unable to get a real lunch break I have not blogged since 8 this morning.  Tonight I got my Brennan fix even if it was just a one hour visit.  And now I’m home just wanting to unwind thinking we will tackle the whole internet thing tomorrow!  I have used the time recently made available to me  to start reading again.  If I have a thing it would be a plethora of books.  So what am I reading??  I have selected two books and they are:

Beyond Sunday Becoming a 24/7 Catholic by Teresa Tomeo.  Good book full of many practical ideas!

I have enjoyed reading again, something I never intended to stop doing when I begin to blog!

It will be interesting to see what will happen once I’m all digital again!

Have a nice peaceful Friday night.

Posted by Deacon Mike Talbot at 8:59 PM No comments:

September Prayer Intention of the Pope

Now more than ever it is a good thing to pray for the Pope and with the Pope.  Here is his very special intention for September, which begins tomorrow:

Posted by Deacon Mike Talbot at 7:56 AM No comments:

Archbishop Anthony Mancini of the Archdiocese of Halifax-Yarmouth. Photo by Michael Swan

By  Michael Swan, The Catholic Register

Posted by Deacon Mike Talbot at 7:39 AM No comments:

The last Catholic Saint of the Day for August; feast day August 31st 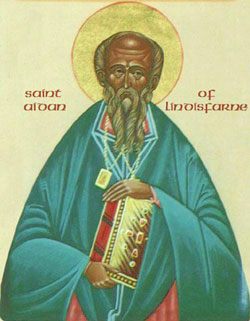 Feastday: August 31 Death: 651
Take the Saints Trivia Quiz now!
Aidan of Lindisfarne, born in Ireland, may have studied under St. Senan before becoming a monk at Iona. At the request of King Oswald of Northumbria, Aidan went to Lindisfarne as bishop and was known throughout the kingdom for his knowledge of the Bible, his learning, his eloquent preaching, his holiness, his distaste for pomp, his kindness to the poor, and the miracles attributed to him. He founded a monastery at Lindisfarne that became known as the English Iona and was a center of learning and missionary activity for all of northern England. He died in 651 at the royal castle at Bamburgh.

Posted by Deacon Mike Talbot at 2:28 PM No comments:

Based on this, I would say Cardinal Wuerl is going nowhere

Posted by Deacon Mike Talbot at 2:08 PM No comments:

I'm still limited to when and how I blog until all the home equipment is replaced and installed.  I'm doing all I can including finding about 2 hours everyday this week with access to free Wi-Fi.

I can post a few things via my phone but it's not easy.

Thanks for reading the various posts here at abitadeacon.blogspot.com.

Hope to be fully up to par soon!
Posted by Deacon Mike Talbot at 8:40 AM No comments:

From Bishop Robert Reed: I will do 24 hours of public prayer and penance

A couple years ago, on a Monday morning, I was informed that I had been named a bishop. When I accepted, I was conscious of the fact that, I also would have to accept whatever the future held with a complete openness to God’s will; much like in a marriage, or when I was ordained a priest.
These days, I find myself deeply disturbed by what is happening in the Church. I know the bishops must act decisively and that the action needs to be thorough, transparent, professional and in cooperation with competent laypeople. But still, I ask the question: what can I do?
All I know is that I can pray and do penance. To that end, and as your pastor, I commit myself to a full day and night of public penance.
On Monday, September 24, 2018, I will celebrate the 9 o’clock Mass in Saint Ann Church as I usually do. Following that Mass I will expose the Blessed Sacrament and remain there in prayer and fasting until the next morning, concluding this period of prayer and penance with the celebration of the 9:00 am Mass on Tuesday.
All throughout this period, the church will remain open. You are most welcome to join me in prayer for a few minutes or for a full hour. In fact, I would welcome your presence as I do the only things I know to do in the face of evil; prayer and penance.
Most sincerely, Bishop Reed
Acts of public penitence by bishops and pastors are absolutely needed. 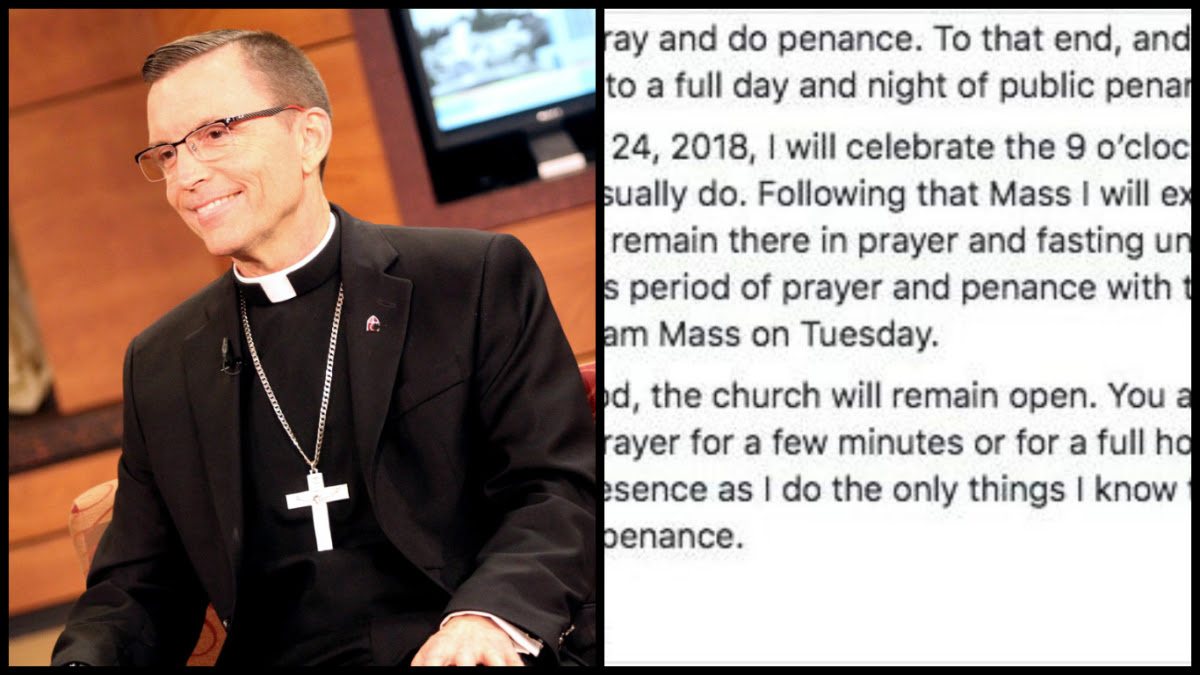 Posted by Deacon Mike Talbot at 8:20 AM No comments: