Founded the missions along the California coast; Canonized a Saint last year by Pope Francis while in America 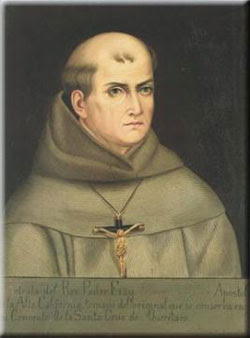 Miguel Jose Serra was born on the island of Majorca on November 24, 1713, and took the name of Junipero when in 1730, he entered the Franciscan Order. Ordained in 1737, he taught philosophy and theology at the University of Padua until 1749.
At the age of thirty-seven, he landed in Mexico City on January 1, 1750, and spent the rest of his life working for the conversion of the peoples of the New World.
In 1768, Father Serra took over the missions of the Jesuits (who had been wrongly expelled by the government)in the Mexican province of Lower California and Upper California (modern day California). An indefatigable worker, Serra was in large part responsible for the foundation and spread of the Church on the West Coast of the United States when it was still mission territory.
He founded twenty-one missions and converted thousands of Indians. The converts were taught sound methods of agriculture, cattle raising, and arts and crafts.
Junipero was a dedicated religious and missionary. He was imbued with a penitential spirit and practiced austerity in sleep, eating, and other activities. On August 28, 1784, worn out by his apostolic labors, Father Serra was called to his eternal rest. He was beatified by Pope John Paul II on September 25, 1988. His statue, representing the state of California, is in National Statuary Hall. His feast day is July 1.
Posted by Deacon Mike Talbot at 8:54 PM No comments:

Following the airport attack in Istanbul, Turkey, that left dozens of people dead and many more wounded, the president of the U.S. Conference of Catholic Bishops extended a message of hope and unity through suffering after the latest string of terrorist attacks.
Archbishop Joseph E. Kurtz of Louisville, Kentucky, issued the following statement June 29.
__

Drawing Strength from God’s Endless Mercy
Evil tests our humanity. It tempts us to linger in the terror of Istanbul, Paris, Brussels, San Bernardino, Orlando, and countless other Golgothas ancient and new. Evil lives in the empty hope that terror will blind us to our common humanity. As Christians, we focus not on the violence, but rather the mournful, hopeful image of Mary, the mother of Jesus. Cradling the broken body of Jesus, given up for all of us, Mary found comfort and strength in the love of her Son. Jesus responded to horrific suffering with mercy.
Each time terror returns us to Golgotha, we should ask: can we respond as Mary did, or will fear numb our compassion? Evil cannot be born from God. Let us take this moment to reach out to our brothers and sisters in solidarity. The true representation of faith is found in the heroic acts of Istanbul’s airport security and emergency response.
As violence picks up its deadly pace, we can draw strength from God’s endless mercy. No matter how often we must return to Golgotha, Mary will always be there to sustain us. Let us, once again, turn our unwavering prayer and generosity toward the suffering.
Posted by Deacon Mike Talbot at 7:16 PM No comments:

A couple of thousand youth come together in Houma to praise God, share Catholic faith

A matter of faith: Hundreds gather for Catholic youth conference in Houma

Teens listen to speakers today at Steubenville on the Bayou in Houma.
Abby Tabor/Staff
By Jacob Batte
Senior Staff Writer

While the Mannings held one camp in Thibodaux, God held his own in Houma.
The Diocese of Houma-Thibodaux's 11th annual Steubenville on the Bayou Catholic Youth Conference drew thousands of teenagers from such states as Illinois, Texas, Mississippi, Florida and Alabama with chaperones to listen to speakers and partake in worship music and praise sessions.
Dressed in reds, pinks, yellow and greens, nearly 2,000 teenagers, staff and volunteer strode into the Houma-Terrebonne Civic Center today for the conference's third and final day.
The conference is comprised of a series of religious services, youth entertainment and seminars meant to reinforce the teachings of the church. For example, separate meetings for young men and women are held to discuss virtue and chastity.
This morning, a group of the teenagers was brought on stage to tell a personal story about their own faith. Eighteen-year-old Paul Becker from Omaha, Neb., said he came to a crossroads with his religion about three years ago when his best friend started to question his Catholic beliefs in a series of texts.
“I just sat there, I had no idea what to do,” Becker told the audience. “What had once been an amazing relationship, was now ripping into my heart.”
That conversation drove Paul to dive deeper into his faith.
“I fell in love with it,” he said.
Houma hosts one of 20 Catholic youth conferences throughout North America, co-sponsored by Franciscan University in Steubenville, Ohio.
Combined, the conferences draw about 38,000 participants each year, event officials said.
Posted by Deacon Mike Talbot at 7:20 AM No comments:

Pray with the Pope in the month of July

Universal: Indigenous Peoples
That indigenous peoples, whose identity and very existence are threatened, will be shown due respect.

Posted by Deacon Mike Talbot at 6:12 AM No comments:

Many martyrs who suffered death under Emperor Nero . Owing to their executions during the reign of Emperor Nero, they are called the Neronian Martyrs, and they are also termed the Protomartyrs of Rome, being honored by the site in Vatican City called the Piazza of the Protomartyrs. These early Christians were disciples of the Apostles, and they endured hideous tortures and ghastly deaths following the burning of Rome in the infamous fire of 62.Their dignity in suffering, and their fervor to the end, did not provide Nero or the Romans with the public diversion desired. Instead, the faith was firmly planted in the Eternal City.
Posted by Deacon Mike Talbot at 7:52 PM No comments:

Supreme Court Justice warns all who love religious freedom; you will lose it in these United States of America

On Tuesday, the Supreme Court declined to hear a lawsuit against a Washington state law requiring pharmacists to dispense chemical abortifacients against their religious beliefs. Their decision to reject the case leaves in place a lower-court ruling that the law doesn’t violate First Amendment rights.
In response, Justice Samuel Alito issued a scathing dissenting opinion, saying those who care about religious freedom should be greatly concerned by the court’s decision to reject the case.
“This case is an ominous sign,” Alito wrote. “At issue are Washington State regulations that are likely to make a pharmacist unemployable if he or she objects on religious grounds to dispensing certain prescription medications. . .  If this is a sign of how religious liberty claims will be treated in the years ahead, those who value religious freedom have cause for great concern.”
The law, which has been on the books since 2007, seems to be a pointed attack on the religious beliefs of the owners of Ralph’s Thriftway, who are devout Christians and believe chemical abortifacients like Plan B are morally and biologically similar to an abortion.
Pharmacies frequently do not carry or will run out of a specific medication and refer customers to alternate stores. Thus the Ralph’s Thriftway owners’ decision not to stock Plan B did not create an unusual situation that prevented people’s ability to purchase abortifacient drugs, Alito noted.
“The evidence relied upon by the District Court suggests that the regulations are targeted at religious conduct alone, to stamp out religiously motivated referrals while allowing referrals for secular reasons (whether by rule or by wink),” he wrote. “I would grant certiorari to ensure that Washington’s novel and concededly unnecessary burden on religious objectors does not trample on fundamental rights. I respectfully dissent
Posted by Deacon Mike Talbot at 7:47 PM No comments: