Another Tuesday Saint of the Day 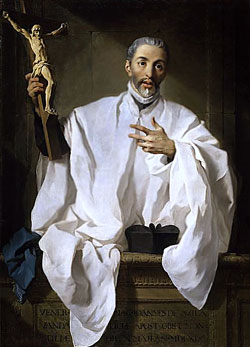 The Apostle of Andalusia and the spiritual advisor of St. Teresa, St. Francis Borgia, St. John of the Cross, St. Peter of Alcantara, and others. He was born on January 6, 1499, at Almodovar del Campo, Spain. After studying law at the University of Salamanca, he left the university to be a hermit. He then went to Alcala, where he was ordained. John drew great crowds with his fiery denunciations of evil and his many sermons. A brief imprisonment by the Inquisition in Seville made him even more popular. His missionary efforts were centered on Andalusia, and his letters and other writings have become Spanish classics. John was canonized in 1970.