Pope Francis highlights the ongoing suffering of the Syrian people

Pope: Social and political inertia turn parts of the world into desolate byways

Pope Francis thanks promoters of the “Open Hospitals in Syria” project for their work in the suffering nation, and says domestic and international disputes and the robbing of opportunities are leaving great numbers of marginalized people and nations stranded by the roadside.

Pope Francis reflected on the ongoing suffering of the Syrian people after 12 years of violent conflict, and upheld the commitment and the healthcare offered to all Syrians in need by a Catholic-run initiative called “Open Hospitals in Syria.”

Greeting members of the AVSI Foundation that promotes and runs the initiative, which is supported by various Holy See institutions, as well as the apostolic nuncio to Syria, Cardinal Mario Zenari, the Pope decried the wounds inflicted on the nation. 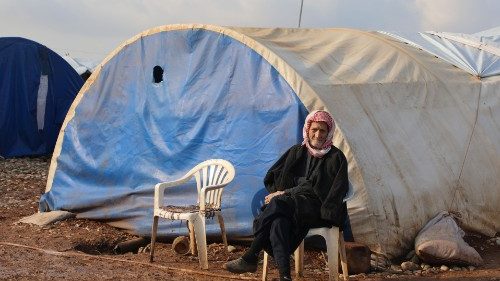 Cardinal Zenari: Let’s not allow Syria to become a “beggar-nation"

If we consider the number of the dead and wounded, the destruction of entire quarters and villages as well as important infrastructures, including healthcare institutions, it is natural to ask: “Syria, who can now heal you?"

He noted that the crisis in Syria continues to be one of the most serious worldwide, “in terms of destruction, growing humanitarian needs, social and economic collapse, and poverty and famine at dire levels.”

The Pope did not neglect to mention the phenomenon of internally displaced persons and refugees of which, he said, there are some 14 million: “more than half of the Syrian population prior to the conflict.”

“In the face of such immense suffering, the Church is called to be a ‘field hospital’ and to heal wounds both physical and spiritual.”

Quoting from the Gospel of Matthew, the Pope said that from the time of the Apostles the Church has remained faithful to the mandate she has received from Jesus to cure the sick and to give without payment.

He noted that the “Open Hospitals” project is committed to supporting the three Catholic hospitals that have operated in Syria for some hundred years, as well as four walk-in clinics, all of which provide their service to all, free of charge.

"Your programme is precisely that of ‘Open Hospitals’.  Open to those who are sick and poor, without distinction of ethnic or religious affiliation.

“This,” the Pope said, “is the hallmark of a Church that seeks to be a home with open doors, a place of human fraternity.

Pope Francis also spoke of the need, within the Church’s charitable institutions, that everyone - and above all the poor - must feel “at home” and experience a climate of dignified welcome.

He noted that, in Syria, many Muslims have been assisted by the “Open Hospitals” project and that this also impacts positively on the social fabric of the community, as it fosters coexistence between different ethnic and religious groups.

“Several hundred of these good Samaritans, including several volunteers, have lost their lives helping their neighbours. Our gratitude goes to all of them.”

The dangers of social and political inertia

Recalling the Encyclical Fratelli tutti in which he wrote, “The story of the Good Samaritan is constantly being repeated,” the Pope commented on the fact that said, “social and political inertia are turning many parts of our world into a desolate byway, even as domestic and international disputes and the robbing of opportunities are leaving great numbers of the marginalized stranded on the roadside” (No. 71).

"I asked everyone to consider that all of us have a responsibility for the wounded, those of our own people and all the peoples of the earth,” he added.

In the face of so many serious needs, he continued, we may feel our contribution is a mere drop of water in the desert: “Yet even the rocky Syrian desert, after the first spring rains, is clothed in a blanket of green. So many small drops, so many blades of grass!”

Pope Francis concluded the audience by offering those present a painting gifted to him by an Italian artist, Massimiliano Ungarelli, that depicts Saint Joseph with the child Jesus on His shoulders during the flight into Egypt, saying it reminds him of the image of a Syrian father fleeing the war with his son on his shoulders.

“This image of a Syrian father fleeing with his son is how I think St. Joseph had to flee to Egypt: he didn't leave in a carriage, no. He was like this, precariously fleeing. […] I would like to offer it to you so that when you look at this Syrian father and his son you think every day of this flight to Egypt, of this people who suffer so much.”

Posted by Deacon Mike Talbot at 11:15 AM