The Bishops of the United States vote to approve a document entitled “The Mystery of the Eucharist in the Life of the Church”, and link it to a pastoral plan for Eucharistic renewal.

US Bishops are calling on American Catholics to “enter more deeply by faith and love” into the Mystery of Mysteries, the Real Presence of Christ in the Eucharist.

Meeting for the Fall General Assembly of the US Conference of Catholic Bishops (USCCB), the Bishops on Wednesday approved a document dedicated to the Eucharist with a secret electronic vote of 222 in favor and 8 against, with 3 abstentions - an overwhelming consensus of over 95%.

Entitled “The Mystery of the Eucharist in the Life of the Church,” the document is divided into two sections: “Christ’s gift of Himself in the Eucharist and our response to that gift.”

According to USCCB president Archbishop José Gómez, the document is closely linked to a separate initiative to promote Eucharistic renewal, including plans for a National Eucharistic Congress in the summer of 2024 in Indianapolis, Indiana.

Returning to the Table of the Lord

The Eucharistic document seeks to remind Catholics of Christ’s Real Presence in the Eucharist and that God is generous in giving His grace “if we, by His grace, humbly ask Him to give us what we need.”

“The Lord is with us in the Eucharistic Mystery celebrated in our parishes and missions, in our beautiful cathedrals and in our poorest chapels,” it reads.

The Covid-19 pandemic has discouraged some people from participating in the Mass in-person, while others have felt their desire to adore Christ in the Eucharist strengthened. The document urges Catholics to never forget Jesus’ words that “unless you eat the flesh of the Son of Man and drink His blood, you do not have life within you” (Jn 6:53). 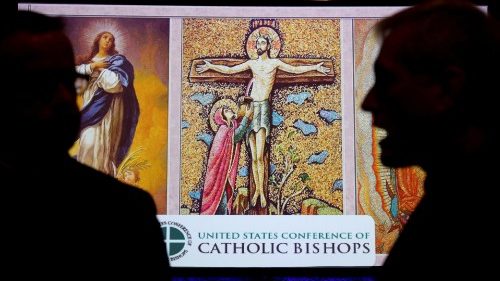 Sharing in communion of love

The Bishops’ document reflects at length on the “gift” of the Eucharist, and recalls that it “is nothing less than sharing in the very life of God, in the communion of love among the Father, the Son, and the Holy Spirit.”

The Eucharist must be understood as a sacrifice, a “re-presentation of the sacrifice of Christ by which we are reconciled to the Father.”

Another essential aspect is the Real Presence of Christ, say the Bishops. “The reality that, in the Eucharist, bread and wine are truly transformed into the Body, Blood, Soul, and Divinity of Christ without ceasing to appear as bread and wine to our five senses is one of the central mysteries of the Catholic faith.”

The Bishops also call on American Catholics to worship Christ in the Blessed Sacrament through Adoration, Processions, and Forty Hours Devotion, as well as receiving Holy Communion.

Our lives are our response

The Eucharistic document then turns to our response to the gift of the Eucharist.

“Having been sanctified by the gift of the Eucharist and filled with faith, hope, and charity, the faithful are called to respond to this gift,” it reads. “Indeed, it is only natural that we give thanks to the Lord for all that He has given to us.”

Our gratitude is best expressed when we take “a full, conscious, and active part in the liturgical celebration.” This means paying attention to the prayers, Scripture readings, and homily, as we also participate with our bodies by singing, kneeling, sitting, and standing.

The document notes that the Eucharist also involves our transformation in Christ, which touches on every aspect of our Christian lives, including our public life.

Receiving Christ in the Eucharist fills us with love that should extend to those around us, especially toward the poor and most vulnerable.

Conversion is another important aspect, since our reception of the Eucharist can harm us if we receive the Sacrament in a state of mortal sin.

“There are some sins, however, that do rupture the communion we share with God and the Church,” reads the document. “These are referred to as grave, or mortal, sins. One commits a mortal sin by freely, knowingly, and willingly choosing to do something that involves grave matter and that is opposed to charity, opposed to the love of God and neighbor.”

When Catholics are in a state of mortal sin, we must seek out the Sacrament of Reconciliation and absolution before receiving the Eucharist.

The document says that a Catholic who “has broken communion with Christ and his Church but receives the Blessed Sacrament acts incoherently, both claiming and rejecting communion at the same time.”

The Bishops then repeat a portion of their 2006 document on the Eucharist, which called on Catholics who publicly reject “defined doctrines of the Church, or knowingly and obstinately repudiate her definitive teaching on moral issues,” to refrain from receiving Communion.

They also note that “reception of Holy Communion in such a situation is also likely to cause scandal for others.”

In conclusion, the document recalls that the Eucharist is food for our Christian journey, one which pushes us to engage in the Church’s mission.

“At the very end of the celebration of the Eucharist, we who have received the Body and Blood of Christ and have been incorporated more profoundly into his Mystical Body are likewise sent out to proclaim the Good News for the salvation of the world: ‘Go in peace, glorifying the Lord by your life.”

Posted by Deacon Mike Talbot at 9:33 AM