Is this North Dakota campus minister to be declared a Saint? 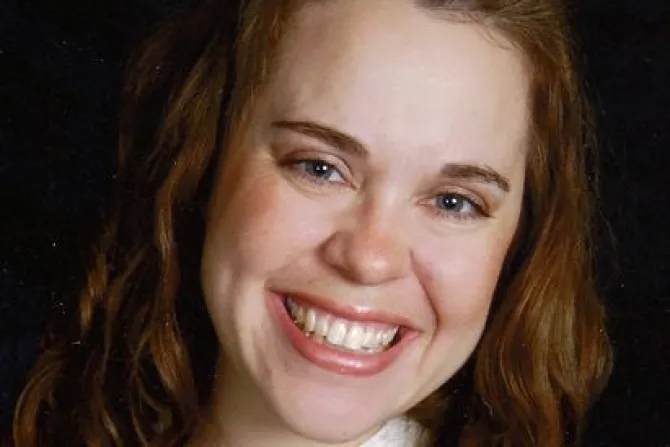 Michelle Duppong was a North Dakota Catholic woman who lived such an exemplary life of faith, joy, and campus missionary work that her home diocese will open an inquiry into whether she should be recognized as a saint of the Church.

That was the news Bishop David Kagan of Bismarck had for a Fellowship of Catholic University Students gathering on Thursday.

Others who knew Duppong, like former colleague Mark Botek, praised her life.

“I think she just had such a zeal and passion for souls and an urgency to help them to encounter the joy that she was able to experience through her own relationship with Jesus,” said Botek, who was a regional director for FOCUS when Duppong was on the college missionary organization’s staff.

“Her joy was contagious,” he told CNA on June 17. “People describe the experience of meeting Saint John Paul II or Teresa of Calcutta, as (being) like you're the only person in the room. Michelle definitely had that quality as well, where it felt like the whole rest of the world faded away and there’s just this conversation between you.”

“Every time people would see her, she would just have a big smile for them,” he said. “I remember she always was smiling. It was not a forced smile. She lived with this joy that always sought to draw other people, and she would go really the extra mile in order to try to encounter them and just make sure that they were okay.”

A cancer diagnosis in December 2014 was followed by a year of declining health. She died on Christmas Day in 2015 at the age of 31, surrounded by family at her childhood home.

Kagan’s announcement that the Bismarck diocese would investigate her life is a first step to possible beatification and canonization. The investigation will gather evidence about Duppong’s life and deeds, compile any private or public writings, and collect testimony from witnesses of her life.

The diocese will present her case to the Congregation for the Causes of Saints. If the congregation accepts her cause, she will be known under the title “Servant of God.” Not all cases proceed beyond the diocesan phase. Typically a prospective saint advances to beatification after a credible report of a miracle attributed to the saint’s intercession, and a second miracle is required for canonization.

Botek said from what he knew of Duppong, the investigation into her sainthood wasn’t much of a surprise.

“Actually, I was not really surprised by it,” he told CNA. “Knowing Michelle over the years, I just always assumed that this would be the natural way things would go. I didn't expect it to happen within my lifetime.”

The Bismarck diocese’s announcement did bring him “quite a bit of sadness,” recognizing “that we miss Michelle.”

“We were pretty good friends. Her passing leaves a big hole in the world and my life,” he said.

Duppong was born in Colorado on January 25, 1984. At the age of one her family moved to a farm in Haymarsh, N.D., about a 60-mile drive west from Bismarck. Her obituary said she loved farm life, working in the gardens and vineyards, and taking part in campfire sing-alongs.

“Michelle will always be remembered as a spirited woman of God who loved to have fun and spread joy,” her obituary said. “Aside from constantly opening her own home to share her faith and enthusiasm for music and dancing, one of her greatest joys was in sharing her love for Haymarsh and the family farm with others.”

“She cherished the small country church of St. Clement located near their home and as an adult, frequently made trips there to visit her Beloved Lord Jesus,” the obituary added.

Duppong was a 2002 graduate of Glen Ullin High School. She studied horticulture at North Dakota State University in Fargo, where she graduated in 2006, but she also spent the time focused on her faith. She took part in the Fellowship of Catholic University Students ministry at St. Paul’s Newman Center, the Catholic campus ministry.

During this time, she later wrote, she was inspired by the life of St. Pier Giorgio Frassati, a young Italian who contracted polio from working with the poor and died at the age of 24 in the early twentieth century.

“Why do I share his story? Well, reading about Pier Giorgio’s life made holiness seem so practical, so attainable,” she wrote in a March 2, 2015 column for the Dakota Catholic Action newspaper. “He was an ordinary young person who loved Jesus and allowed this love to pour forth into his relationships with others. He embodied what Jesus taught in the eight beatitudes (Mt. 5:3-10). He’s a hero to me; and I want to be like him.”

Botek told CNA he believes her faith truly blossomed during her time as an undergraduate student at North Dakota State.

“I think that was a very significant time in her life,” he said.  “Michelle, because she found a good community in a place where she could grow in holiness was really just beginning her life of holiness.”

She joined FOCUS full-time in 2006, the same year as Botek.

“She just prayed at all times,” he recalled. “I remember just being in conversations with her and thinking that she's actually talking to the Lord as we're having this conversation as well. She always seemed to have this interior presence, showing her connection with Jesus and the way that she prayed. She was also unbelievably faithful to her prayer and in every circumstance.”

“She always just really brought that spirit of prayer into everything we do, and it was very inspiring to me and something that I continue to take with me,” he said.

He added that Duppong was “always joyful and hopeful.”

“It could be really annoying to people because she was always finding the hopeful outcome, and so because it's not easy to see that or experience that or when you see when you're experiencing hardship when her joy would come. I think that sometimes people were a little bit irritated by that, but for the most part, she  just really inspired people to want to pray more and want to seek care for God's will in their life and to desire to be around her.”

Monsignor James Shea, president of the University of Mary, described her as “a radiant, joyful woman with the heart of a true servant.”

“For the students on our campus, she was an inspiration and a treasured mentor, teaching them by her example the transformative power of friendship with God.”

Botek said he learned from her that “it’s possible to have joy in all circumstances.”

“She put Jesus first and foremost, and then she put others before herself,” he said.

Her obituary said her cancer diagnosis started “a year-long journey that brought many joys in the midst of sorrows and suffering.”

“She received everything with a docile spirit, praying that the Lord’s will be done and trusting in his providence,” the obituary said. “Though she often felt helpless lying in a hospital bed, the last year of her earthly life was spent in complete service of the Lord continuing her most fruitful work as one of God’s servants and pouring her love out on those around her.”

Botek spoke to her the day of her cancer diagnosis.

“I called her to pray with her a little bit and she was just almost nonchalant about it,” he told CNA. “Not joyful or anything like still trying to meet it, but just very resigned,” Botek said.

He summarized her sentiment in that conversation as “yeah, one way or another, God’s will be done.”

“That's just the way that she encountered so many circumstances,” he said.

Duppong reflected on her own diagnosis in a Jan. 30, 2015 column for Dakota Catholic Action.

“We have no idea how God’s plan will unfold in our lives and how he is using us to reach others,” she wrote. “We know that we're all in this together and that we're all on the same team in the body of Christ, so I see the present suffering as taking one for the team. May God be glorified by all the good that comes through this!”

Her funeral Mass was celebrated at Bismarck’s Cathedral of the Holy Spirit and she was buried at St. Clement’s Cemetery in Haymarsh. She was survived by her parents, five siblings, and a boyfriend.

For Botak, Duppong was a woman who defied categories.

“I think that she could have been a saint in any time, the way that she pursued Jesus with such a selfless abandonment,” he said. "She definitely lived in the midst of the world, but she was not above the world, so she definitely related to and encountered the people that she walked with, not as if she was from someplace else, but as one of them.”

A documentary about her life is in development. “Thirst for Souls: the Michelle Duppong Story” will premiere at the FOCUS national conference SEEK23, scheduled for Jan. 2-6, 2023 in St. Louis.