Pope Francis meets with the President of Hungary 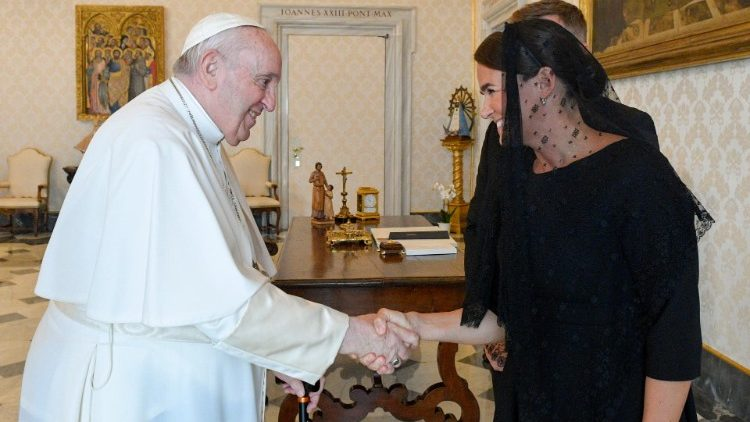 After meeting with Pope Francis on Thursday, Hungarian President Katalin Novák grants an interview to Vatican News, and says her Christian faith and identity as a mother help guide her actions as the nation’s first female president.

The need to support families and to encourage young people to begin families; the importance of women leaders, especially in times of conflict; and the prospect of a papal visit to Hungary were all on the table on Thursday, as Pope Francis met with Hungary’s first female president, Katalin Novák.

Among the topics raised during their conversation was “the importance of having women leaders all around the world, or at least to have more women leaders in these times of conflict,” said President Novak, in the interview held in the studios of Vatican Radio. She commented, “It is a chance, as a woman president, to somehow intervene in a good sense, and to make a conflict move forward from a frozen status.”

President Novák noted, too, that taking on a leadership role involves “a huge responsibility… that makes you responsible for what you say, for how you say it, for how you behave, how you look, and what your message is.”

As a mother of three, she said, “I am not only a woman president, but also a mom… and that makes me understand much easier, I think, what it means, on a daily basis, to struggle [with this imbalance… of family life and the professional career.”

“For me, family is the most important. But on the other hand, I love my job, and I would like to have my professional job or career as well.”

She said she hopes that “being someone in a responsible position” and who is “keen on her job” can help her to be an even more credible witness “that having children and having a family is something not worth giving up on.”

The importance of young families

President Novák highlighted “the importance of traditional families” and of encouraging young people to have children and begin families as one of the main points of her conversation with Pope Francis.

Civil and religious leaders can work together to support the family, she said, by emphasizing “the importance of traditional families” and “the beauty of the privilege of giving birth to a child” which is a unique gift of women.

“If we speak about this,” she said, “and if we give this over to the younger generations in a positive manner, not going against anything, but just underlining the beauty and the importance of childbearing and traditional family, then I think that we can help these young people, because having children is not only about money — it is also about money, but it is also about our feelings. It’s about something you cannot even describe, that you cannot even put into words if you haven’t lived it.”

The Hungarian president also spoke with Pope Francis about the challenges public figures face when living out their beliefs. As a leader and a stateswoman, she said, “it’s not easy” to decide how to share one’s faith and how to be open and honest about one’s beliefs.

“For me, it is also a personal challenge because I am a Protestant Christian believer. And for me, my faith is of utmost importance.”

President Novák said she knows that she is accountable to God and must look to Him, and added, “I know that my help, my support, and my blessings will come from Him.”

Invitation for Pope to visit Hungary

In the course of the papal audience, the Hungarian president also extended an official invitation to Pope Francis to visit her country, and received the Holy Father’s assurance that he intended to visit Hungary “hopefully” in the first half of 2023.

President Novák said that during their conversation, the two leaders also touched on issues such as the persecution of Christians and how Hungary is supporting persecuted Christians throughout the world; and on the “demographic winter" that Pope Francis has so often highlighted, and which “we all face in the western part of the world.”

Speaking of Hungary’s response to the latter, President Novák said, “Pope Francis was surprised to hear that in Hungary the number of marriages doubled in the last ten years,” while abortions dropped by 50 percent.

Meeting at the Secretariat of State

Following the meeting with Pope Francis, President Novák also met with Cardinal Secretary of State Pietro Parolin, who was accompanied by Archbishop Paul Richard Gallagher, Secretary for Relations with States and International Organizations.

“During the cordial discussions in the Secretariat of State, after recalling the Apostolic Journey to Budapest, last September, on the occasion of the 52nd International Eucharistic Congress, appreciation was expressed at the good existing bilateral relations,” read a statement from the Holy See Press Office issued after the meetings.

The statement added, “The parties then focused on some issues of common interest, such as the family, promotion of the culture of life, the youth and the situation of Christians in the Middle East.” Finally, it said, “attention turned to the war in Ukraine and the commitment to peace.”

Posted by Deacon Mike Talbot at 10:32 AM