Pope to French altar servers: 'Be proud of your work'

Addressing over 1,000 altar servers from France who are on pilgrimage in Rome, Pope Francis says they are a model for many young people of their age, and reminds them that their mission does not end at Mass.

“It is an honor to serve Jesus when He gives His life for us in the Eucharist”, but "serving the Mass requires a follow-up."

Pope Francis underscored this point on Friday as he addressed a pilgrimage of some 1,200 young altars servers from France gathered in the Paul VI Audience Hall in the Vatican. 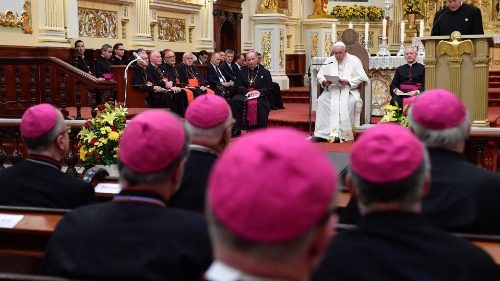 Ministries in the Church: Pope calls for a dialogue with Bishops

A model for other young people

Reflecting on the theme chosen for the pilgrimage, led by Archbishop de Moulins-Beaufort of Reims – ‘Come, Serve and Go!’ – the Pope said they should be “proud” of what they do, because through their participation in the liturgy, they “offer everyone a concrete witness of the Gospel” and “can be a model” for many young people of their age.

“Your attitude during the celebrations is in itself an apostolate for those who see you. If you carry out your service at the altar with joy, dignity, and with an attitude of prayer, you will certainly inspire in other young people the desire to commit themselves to the Church as well.”

Serving Jesus in the people around us

At the same time, Pope Francis remarked that their mission does not end at Mass, but continues in serving their neighbours in need.

“After serving Jesus at Mass, He sends you to serve Him in the people you meet every day, especially if they are poor and disadvantaged, because He is particularly united with them,” said the Pope.

He therefore urged them to reach out in particular to their peers living in difficult neighbourhoods, or who face great suffering and even addictions, and to young migrants and refugees.

“Many people your age need someone to tell them that Jesus knows them, that He loves them, that He forgives them, that He shares their problems, that He gazes at them with tenderness without judging. With your courage, your enthusiasm, your spontaneity, you can reach out to them.”

Prefer “real friendships” to “virtual ones”

Insisting on the importance of “closeness”, Pope Francis further called on the French altar servers not to fall into the temptation of selfishness, of withdrawing into themselves, in small groups, and in virtual social networks.

He said they should prefer “real friendships” to “virtual ones”, which are “illusory”, imprison them and separate them from reality.

Pope Francis went on to encourage the young pilgrims to cherish their relationships with their grandparents, reiterating once again that the elderly are a “necessary resource” for young people’s human maturity and for their faith.

“Search for your roots, learn to know and love your culture, your history, so as to enter into dialogue with those who are different from you, strong of who you while respecting who others are.”

At the same time, Pope Francis encouraged the French altar servers to “dream big” and to cultivate their aspirations, including that of becoming a priest or entering a religious order.

"Never give up on your dreams; never bury a vocation definitively," he said.

Entrust yourselves to Mary

Finally, before imparting his blessing, Pope Francis urged the young pilgrims to entrust themselves to the Lord through the Virgin Mary who made “herself a servant with her generous, fruitful and joyful ‘yes’."

“On your paths, in your moments of difficulty and loneliness, do not forget to entrust yourself to her,” he concluded.

Posted by Deacon Mike Talbot at 11:09 AM