Feast of Our Lady of Czestochowa

Our Lady of Czestochowa (Poland) 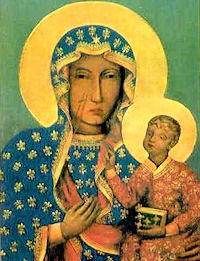 O God, who have prepared for those who love you good things which no eye can see, fill our hearts, we pray, with the warmth of your love, so that, loving you in all things and above all things, we may attain your promises, which surpass every human desire. Through our Lord Jesus Christ, your Son, who lives and reigns with you in the unity of the Holy Spirit, God, for ever and ever.

Before the reform of the General Roman Calendar today was the feast of St. Zephyrinus whose long pontificate was a period marked by the persecution of Septimus Severus, the struggle against heresy and the organization of the Christian community in Rome. In the person of the Pope the Roman Church asserted her claim as the appointed guardian of the true faith.

Today is also the feast of Our Lady of Czestochowa. According to tradition, the icon of Jasna Góra was painted by Luke the Evangelist on a tabletop built by Jesus himself, and the icon was discovered by St. Helen, mother of Emperor Constantine and collector of Christian relics in the Holy Land. The icon was then enshrined in the imperial city of Constantinople, according to the legend, where it remained for the next 500 years.

Our Lady of Czestochowa (The Black Madonna) 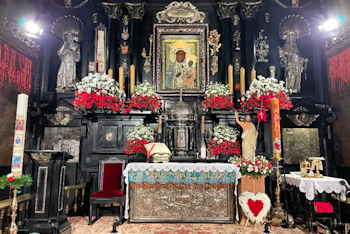 The image of Our Lady of Czestochowa, also known as the Black Madonna, was traditionally believed to have been painted by St. Luke the Evangelist on a cypress wood panel from a table used by the Holy Family in Nazareth. It was said to have been brought from Jerusalem by St. Helen and was enshrined in Constantinople for 500 years. It was given to a Greek princess married to a Ruthenian nobleman and it was housed in the royal palace at Belz in the Ukraine for the next 600 years. Art historians believe it is a Byzantine icon of the Hodigitria type dating from the 6th - 9th Century.

The image was brought to Poland in 1382 by Ladislaus of Opole who rescued the painting from Belz while escaping an attack by the Tartars who had damaged the painting with an arrow. On his way to Silesia, Ladislaus stopped to rest in the town of Czestochowa near the church on Jasna Góra (Bright Hill). He believed that it was Our Lady’s desire for her image to remain in Czestochowa so he left the image at the church and invited the Pauline monks from Hungary to be its guardians.

On April 14, 1430, robbers, sometimes associated with the Hussites of Bohemia, looted the monastery and made three slashes on the face of Our Lady in an attempt to remove valuable stones, finally smashing the image into three pieces. In order to repair the icon, the original paint was removed and the icon was repainted. Although the icon was restored, the slashes in Our Lady’s face remain visible today.

The image of Our Lady of Czestochowa is associated with several miraculous events. One of the most spectacular occurred in 1655 during the height of the Protestant Revolution. The Swedish Lutheran army invaded Poland winning victories over the city after city including Cracow and Warsaw. The Polish King fled the country. When the Swedish army came to Jasna Góra hoping to plunder the sacred site, the monks refused to surrender although they were greatly outnumbered. The following account is from the Polish historian Norman Davies as quoted in Warren Carroll’s series on Christianity.

“When negotiations brought no result the Swedes began a violent bombardment of the walls. Then, in order to spread fear among the defenders, they started to hurl blazing firebrands, setting the monastery’s barn alight together with a great quantity of corn. Next, all around the monastery, they set up a camp with wooden palisades and gun emplacements…But their attack had little effect. The walls were banked with earth on the inside, and only the cannon displaced a few bricks. Before long, the defenders opened fire in reply. The aim of their gunners was so accurate that after three hours the Swedes were obliged to pull back with great loss. Meanwhile, the inhabitants of houses adjacent to the monastery, where the enemy had found shelter, set their homes on fire, not counting the cost... 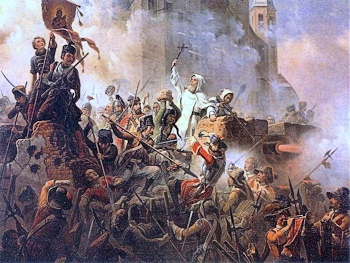 The Swedes renewed their attack on the 19th of November, the day of the Transfiguration of the Virgin…the official printed a description of this siege, which records that bullets and missiles fell so thick on the church and tower that they seemed to be in flames. But…the cannon balls bounced off the walls and tiles or flew over the church roof, causing no damage….Muller (the Swedish commander) was most angered by the monks, who would climb to the top of the tower and in full choir pour down pious hymns on his soldiers…

Jasna Góra was not saved by men…A thick mist screened the monastery from attack…Muller himself saw a Lady in a shining robe on the walls, priming the cannon and tossing shells back in the direction from which they came…He (General Muller) launched this last attack on Christmas Day, firing off all his guns in one salvo, and sending his entire army to storm the walls…But at that very moment, he suffered a fatal accident. He was eating breakfast in a fairly distant house, and cursing Jasna Góra with blasphemies, when suddenly an iron shot penetrated the wall, knocked down all the plates, bottles and glasses from the table, scattered the guests, and struck him in the arm…At last, in the night before St. Stephen’s Day, the Swedes started to drag the guns from their emplacements, to collect their equipment, and to direct their wagons in the direction of Klobuck…Of course, no heretic will believe that cannon balls were repulsed from the walls of Jasna Góra by supernatural means…but all that I have described is true.”

The victory of Our Lady of Czestochowa at Jasna Góra turned the tide of the war. In 1656, the Polish King Jan Casimir proclaimed the Mother of God the “Queen of the Polish Crown” and the shrine at Jasna Góra, the “Mount of Victory” and the spiritual capital of Poland. In recognition of the miraculous image, Pope Clement XI donated a crown to be placed on the image in 1717. Thieves stole the bejeweled crown in 1909. Pope St. Pius X replaced the 1717 crown with a crown of gold.

The holy painting enshrined at Czestochowa has been a lighthouse of hope during centuries of hardship and defeat. Today, the Shrine of Our Lady of Czestochowa attracts millions of who love and honor Our Lady’s intercession.

Why is She Black?

There have been reports for centuries of miraculous events such as spontaneous healings occuring to those who made a pilgrimage to the portrait. It is known as the “Black Madonna” because of the soot residue that discolors the painting. The soot is the result of centuries of votive lights and candles burning in front of the painting. With the decline of communism in Poland, pilgrimages to the Black Madonna have increased dramatically.

—Excerpted from The Mary Page