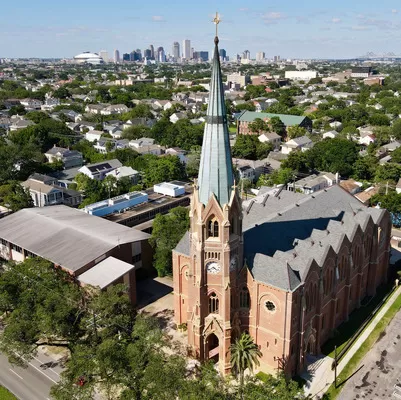 The Vatican’s Dicastery for Divine Worship and the Discipline of the Sacraments has formally designated St. Stephen Church on Napoleon Avenue in New Orleans as a minor basilica, one of only 90 U.S. churches to have received that honor since 1926.

St. Stephen’s designation as a minor basilica – a church to which special privileges are attached – means the Archdiocese of New Orleans now has two minor basilicas. St. Louis Cathedral was named a basilica on Dec. 9, 1964, and continues to be the seat and home church of the archdiocese, where the “cathedra,” the archbishop’s chair, remains.

Msgr. Christopher Nalty, pastor of Good Shepherd Parish, which encompasses the churches of St. Stephen, St. Henry and Our Lady of Good Counsel, said he was motivated to seek the special designation as a means of strengthening evangelization efforts within his Uptown parish.

Msgr. Nalty envisions creating “a pilgrim trail” that would include St. Stephen’s and other New Orleans Catholic sites of major historical and devotional importance, such as the National Shrine of Our Lady of Prompt Succor on State Street, the Blessed Francis Xavier Seelos Center in the Irish Channel and St. Louis Cathedral and the Old Ursuline Convent in the French Quarter.

“Those are four Catholic sites that stand on their own, and in the middle of it, you’ve got this big, old church (St. Stephen’s) which was a huge center of pastoral activity in the 1800s and 1900s,” Msgr. Nalty said, envisioning a pilgrim trail that could attract Catholics from throughout the state and nation.

“I’d like to have my church open during the day,” Msgr. Nalty said. “If your church becomes a basilica, it would naturally bring more attention to the church and attract pilgrims. I’d also like to have someone at the church who would be trained as a tour guide to share the history of the parish and explain the architectural elements of the church.”

There are two types of basilicas in the Catholic Church – major and minor.

Criteria for basilica status
There are several criteria for a church to be designated a minor basilica. The title could be bestowed for architectural beauty, historical significance, liturgical renown, the presence of a special relic or work of art or for any combination of those qualities.

A basilica has special privileges with ties to the pope. One of the most important is the plenary indulgence, which the faithful who devoutly visit the basilica on certain days and participate in sacred rites may receive.

The three church symbols that distinguish a basilica are the ombrellino (little umbrella), the tintinnabulum (bells) and the symbol of tiara and keys that is on the Vatican flag. Msgr. Nalty is commissioning artists to design a coat of arms and craft the basilica’s umbrella and bells.

“The purpose of the umbrella was that it was held over the pope as he walked around Rome,” Msgr. Nalty said. “So, in a basilica, it is kept partially open, anticipating the pope’s possible visit. If St. Stephen’s had been a basilica when Pope John Paul II came to New Orleans in 1987, I believe he would’ve come to St. Stephen’s.”

Msgr. Nalty began investigating the idea of pursuing the formal designation after a $6.9 million renovation to St. Stephen’s Church was completed in 2018. He raised the idea privately with Archbishop Gregory Aymond, and the topic was discussed at a meeting of the Presbyteral Council in late 2019.

Priestly support
After explaining why he thought St. Stephen’s and the archdiocese would benefit from the title, Msgr. Nalty said he was pleasantly surprised by the response from fellow priests.

“The first person to speak was Father Daniel Green, who at the time was pastor of Blessed Trinity Parish,” Msgr. Nalty said. “He said, ‘You know, with all the bad news going on in the church, this is the kind of thing we need – to say we’re Catholic and this is what we do.’ There was one priest who was a little hesitant because of Pope Francis’ ideas of simplicity, and basilicas would be considered ‘high church.’ Well, they took a vote, and it passed easily.”

Two months later, the COVID-19 pandemic hit, and the idea was placed on the back burner.

Over the next 19 months, Msgr. Nalty worked on an extensive application that looked more like a coffee-table book – everything from the church’s history, to its liturgical architecture to photos of sacred objects and drone photos of the church exterior provided by Msgr. Nalty’s brother Kevin.

Along the way, Msgr. Nalty learned from a Vatican liturgist more than he ever wanted to know about liturgical requirements of a basilica.

“Out of all the things in the church,” Msgr. Nalty said, smiling, “he complained that we had two lecterns. One was for the lector to announce the Mass intentions, and the other was to hold the book near the presider’s chair. He said, ‘No, no, no. There are only three elements to the sanctuary – the altar, the ambo and the chair – and anything extra is verboten.’ I just moved the lectern out of the way.”

Some of the other major requirements for the basilica designation is the use of Gregorian chant for certain Mass parts, the regular recitation of the Liturgy of the Hours in the church and a strong pastoral presence within the community.

School has made a difference
“The thing I’m most proud of is my school, because for the last six years, every kid in that school has gone to a Catholic high school,” Msgr. Nalty said.

Regular prayer at the basilica will also be important. There are two Notre Dame seminarians studying for the Community of Jesus Christ Crucified who are in residence at St. Stephen’s, and they pray the Liturgy of the Hours daily in church as well as participate in eucharistic adoration and other devotions.

Msgr. Nalty finished the 100-page application last October and hand-delivered a copy to the dicastery on a previously scheduled trip to Rome. The official petition was sent to Rome by the archbishop.

A week before Easter, Msgr. Nalty got word that the dicastery wanted to set up a conference call with Archbishop Aymond. And then, a few weeks later, the archbishop opened his mail and read a letter, dated May 12, declaring that the minor basilica designation had been granted.

Special Mass June 28
To  mark the church being raised to basilica status, Msgr. Nalty will celebrate a parish Mass of Thanksgiving June 28 at 6 p.m. – the Vigil of the Solemnity of Saints Peter and Paul. The decree will be read before the Gloria. The public is invited to attend.

St. Stephen Parish was established in 1849 and staffed by the Vincentian Fathers. The foundations for the current church were laid in 1867, but the turmoil after the Civil War did not allow the church to be completed until 1887. It was solemnly dedicated on Jan. 1, 1888.

With the designation of St. Stephen’s as a basilica, Louisiana now has three minor basilicas: St. Louis Cathedral and St. Stephen’s in the Archdiocese of New Orleans and the Basilica of the Immaculate Conception in Natchitoches, the former cathedral of the Diocese of Alexandria, elevated in 2009.