BISHOP ISSUES DECREE: SCHOOL MAY NO LONGER CALL ITSELF CATHOLIC 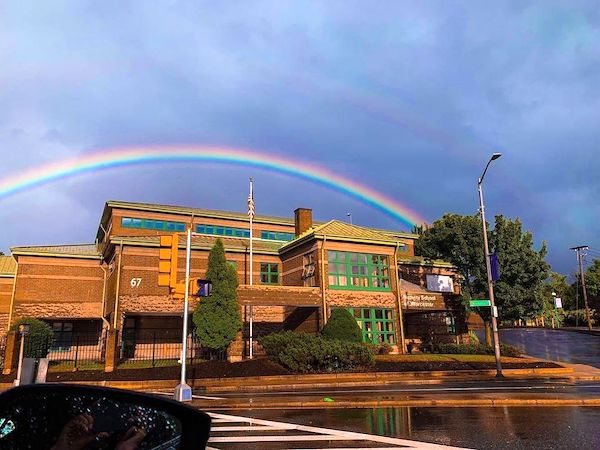 “MASS, SACRAMENTS AND SACRAMENTALS ARE NO LONGER PERMITTED TO BE CELEBRATED ON NATIVITY SCHOOL PREMISES OR BE SPONSORED BY NATIVITY SCHOOL IN ANY CHURCH BUILDING OR CHAPEL WITHIN THE DIOCESE OF WORCESTER.”

From the Diocese of Worcester:

After discussions over the past few months in an attempt to find alternatives to flying the Black Lives Matter and gay pride flags outside the school which are inconsistent with Catholic teaching,  Bishop Robert J. McManus of the Diocese of Worcester has issued the following official decree regarding the Nativity School in Worcester. The decree is being published online today in The Catholic Free Press, the official newspaper of the Diocese of Worcester.

DECREEThe Nativity School, located at 37 Lincoln Street, Worcester, Massachusetts, was established in 2003 and developed by the senior administration of the College of the Holy Cross of Worcester to address the devastating graduation rate among boys experiencing economic insecurity. It currently serves boys in grades five through eight.

The school claims to be a “Catholic” school affiliated with the Roman Catholic/Jesuit tradition. The administration of the school has permitted the flying of “Black Lives Matter” and “Gay Pride” flags in front of the school for a period of time.

I publicly stated in an open letter dated, May 4, 2022, that “these symbols (flags) embody specific agendas or ideologies (that) contradict Catholic social and moral teaching.” It is my contention that the “Gay Pride” flag represents support of gay marriage and actively living a LGBTQ+ lifestyle.

This is also true of “Black Lives Matter.” The Catholic Church teaches that all life is sacred and the Church certainly stands unequivocally behind the phrase “black lives matter” and strongly affirms that all lives matter.

However, the “Black Lives Matter” movement has co-opted the phrase and promotes a platform that directly contradicts Catholic social teaching on the importance and role of the nuclear family and seeks to disrupt the family structure in clear opposition to the teachings of the Catholic Church.

The flying of these flags in front of a Catholic school sends a mixed, confusing and scandalous message to the public about the Church’s stance on these important moral and social issues.

According to canon 803, §§ 1-3, of the Code of Canon Law, the Diocesan Bishop must maintain vigilance over Catholic Schools within his Diocese, even those operated by lay groups who seek the use of the title “Catholic” for their schools. Such usage requires ecclesiastical approbation (canon 803, §3).

An ‘Instruction’ recently published by the Holy See through the Dicastery for Catholic Education, entitled “The Identity of the Catholic School for a Culture of Dialogue,” stated that “Catholic schools are a part of the Church’s mission (par. 21) and have the great responsibility to bear witness through an education project clearly inspired by the Gospel (par. 28). Catholic schools are ecclesial entities. As such they participate in the evangelizing mission of the Church and represent the privileged environment in which the Church’s education is carried out.” (par. 30)

As Diocesan Bishop, it is my sacred duty and inherent responsibility to determine when a school claiming to be “Catholic” is acting in such a way that is contrary to the teachings of the Catholic Church and disregards my legitimate authority as the guardian and overseer of Catholic education in the Diocese of Worcester. Despite my insistence that the school administration remove these flags because of the confusion and the properly theological scandal that they do and can promote, they refuse to do so. This leaves me no other option but to take canonical action.

After prayerful consideration of this matter, I, the Most Reverend Robert J. McManus, Bishop of Worcester, holding before me my pastoral responsibilities to this particular Church, in view of canon 381, §1, hereby declare and decree the following:

• The Nativity School of Worcester is prohibited from this time forward from identifying itself as a “Catholic” school and may no longer use the title “Catholic” to describe itself;• Mass, sacraments and sacramentals are no longer permitted to be celebrated on Nativity School premises or be sponsored by Nativity School in any church building or chapel within the Diocese of Worcester;• The Nativity School is not allowed to undertake any fundraising involving diocesan institutions in the Diocese of Worcester and is not permitted to be listed or advertise in the Diocesan Directory;• The name of Bishop Emeritus Daniel P. Reilly must be removed from the list of the Board of Trustees of Nativity School.This decree is effective immediately.I order that this decree be published.Given at Worcester, Massachusetts, this the tenth day of June, in the Year of Our Lord, two thousand twenty-two.

The school’s response, in a letter:

On behalf of the Nativity School of Worcester Board of Trustees, leadership and staff, I write to share news regarding a change in Nativity’s relationship with the Diocese of Worcester and our continued commitment to providing an excellent education rooted in the Jesuit tradition. Nativity was founded in 2003 as an independent, Catholic, Jesuit middle school that provides a quality, tuition-free education to boys from under-resourced communities. Nativity is the only tuition-free Catholic school in the Diocese of Worcester and the only school in Central Massachusetts that solely educates students experiencing economic insecurity. The school is entirely funded through the generosity of individuals, foundations, and corporations. We receive no funding from the Diocese and our governance and control of school operations are fully independent of the Diocese.

The Issue: In January 2021, Nativity started flying the Pride and Black Lives Matter flags following our students’ (the majority of whom are people of color) call to express support for making our communities more just and inclusive. As a multicultural school, the flags represent the inclusion and respect of all people. These flags simply state that all are welcome at Nativity and this value of inclusion is rooted in Catholic teaching. Pope Francis has praised the outreach and inclusion of LGBTQ+ people. The U.S. Conference of Catholic Bishops supports the spirit and movement of “Black Lives Matter.” Both flags are now widely understood to celebrate the human dignity of our relatives, friends and neighbors who have faced, and continue to face hate and discrimination. Though any symbol or flag can be co-opted by political groups or organizations, flying our flags is not an endorsement of any organization or ideology, they fly in support of marginalized people.

The Bishop’s Position: Bishop Robert McManus, as leader of the Diocese of Worcester, indicated to Nativity and to the public that he believes flying these flags is inconsistent with Catholic teaching. In March 2022, he told the school to remove the flags. Sadly, in mid-March 2022, our flags were torn down by an unknown person, an act that caused harm to our entire community. In late May, the Bishop told Nativity that if the flags were not removed, Nativity will “be prohibited from identifying itself as a Catholic school.” A formal decree announcing the Bishop’s decision will be published in the Catholic Free Press on Thursday, June 16.

Nativity Worcester’s Response: Nativity will seek to appeal the decision of the Diocese to remove our Catholic identity through the appropriate channels provided by the Church in circumstances like this. At the same time, after meaningful deliberation and discernment by its Board, leadership team, faculty, and partners, Nativity will continue to display the flags in question to give visible witness to the school’s solidarity with our students, families, and their communities. Commitment to our mission, grounded and animated by Gospel values, Catholic Social Teaching, and our Jesuit heritage compels us to do so.

Going Forward: The past few months have been galvanizing for our entire community. We are grateful for the overwhelming support we have received from long-time and many new partners, the Worcester community and beyond and the Jesuit community. Nativity is stronger than ever because of the understanding and support of its amazing community members, benefactors and – most of all – students and their families. Please know that any decisions made by the Diocese will not change the mission, operations or impact of Nativity. With your ongoing partnership, we will continue to provide a transformational education for many years to come.