And another Saint & Martyr beheaded by the bloody English 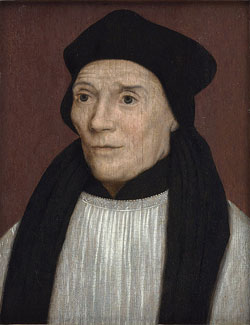 St. John Fisher was born in Beverly, Yorkshire, in 1459, and educated at Cambridge, from which he received his Master of Arts degree in 1491. He occupied the vicarage of Northallerton, 1491-1494; then he became proctor of Cambridge University. In 1497, he was appointed confessor to Lady Margaret Beaufort, mother of Henry VII, and became closely associated in her endowments to Cambridge; he created scholarships, introduced Greek and Hebrew into the curriculum, and brought in the world-famous Erasmus as professor of Divinity and Greek. In 1504, he became Bishop of Rochester and Chancellor of Cambridge, in which capacity he also tutored Prince Henry who was to become Henry VIII. St. John was dedicated to the welfare of his diocese and his university. From 1527, this humble servant of God actively opposed the King's divorce proceedings against Catherine, his wife in the sight of God, and steadfastly resisted the encroachment of Henry on the Church. Unlike the other Bishops of the realm, St. John refused to take the oath of succession which acknowledged the issue of Henry and Anne as the legitimate heir to the throne, and he was imprisoned in the tower in April 1534. The next year he was made a Cardinal by Paul III and Henry retaliated by having him beheaded within a month. A half hour before his execution, this dedicated scholar and churchman opened his New Testament for the last time and his eyes fell on the following words from St. John's Gospel: "Eternal life is this: to know You, the only true God, and Him Whom You have sent, Jesus Christ. I have given You glory on earth by finishing the work You gave me to do. Do You now, Father, give me glory at Your side". Closing the book, he observed: "There is enough learning in that to last me the rest of my life." His feast day is June 22.