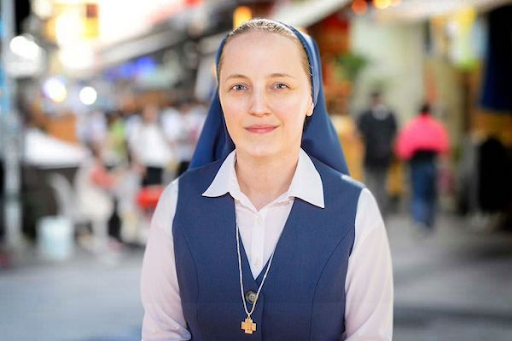 “THE CONCEPT IS TO INTENTIONALLY THINK ABOUT YOUR OWN DEATH EVERY DAY, AS A MEANS OF APPRECIATING THE PRESENT AND FOCUSING ON THE FUTURE.

Before she entered the Daughters of St. Paul convent in 2010, Sister Theresa Aletheia Noble read a biography of the order’s founder, an Italian priest who was born in the 1880s. He kept a ceramic skull on his desk, as a reminder of the inevitability of death. Sister Aletheia thought the morbid curio was “super punk rock,” she recalled recently. She thought vaguely about acquiring a skull for herself someday.

These days, Sister Aletheia has no shortage of skulls. People send her skull mugs and skull rosaries in the mail, and share photos of their skull tattoos. A ceramic skull from a Halloween store sits on her desk. Her Twitter name includes a skull and crossbones emoji.

That is because since 2017, she has made it her mission to revive the practice of memento mori, a Latin phrase meaning “Remember your death.” The concept is to intentionally think about your own death every day, as a means of appreciating the present and focusing on the future. It can seem radical in an era in which death — until very recently — has become easy to ignore.

“My life is going to end, and I have a limited amount of time,” Sister Aletheia said. “We naturally tend to think of our lives as kind of continuing and continuing.”

Sister Aletheia’s project has reached Catholics all over the country, via social media, a memento mori prayer journal — even merchandise emblazoned with a signature skull. Her followers have found unexpected comfort in grappling with death during the coronavirus pandemic. “Memento mori is: Where am I headed, where do I want to end up?” said Becky Clements, who coordinates religious education at her Catholic parish in Lake Charles, La., and has incorporated the idea into a curriculum used by other parishes in her diocese. “Memento mori works perfectly with what my students are facing, between the pandemic and the massive hurricanes.” Ms. Clements keeps a large resin skull on her own desk, inspired by Sister Aletheia.