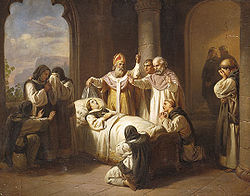 St. Margaret of Hungary Daughterof King Bela IV, she became a Dominican novice at twelve in a royal convent built on an island in the Danube. Although she was a princess among nuns who were of noble descent, she objected to any special treatment and went out of her way to perform the most menial tasks and the most exacting labors on behalf of the squalid poor and most advanced hospital cases. The extend of her labors and fasting and hours of prayer brought on the fatigue of which she died on January 18. her feast day is January 18th.

Posted by Deacon Mike Talbot at 5:33 AM