The Christian Symbolism of the King Cake 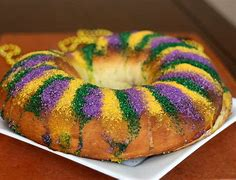 We are just hours away from the beginning of Carnival Season.  On January 6th, the 12th night, the traditional feast of the Epiphany, sometimes called Kings Day, we celebrate the Biblical story of the Three Magi visiting the child Jesus bearing gifts.  Also known as the Three Wisemen, they brought to Jesus gifts of gold, frankincense and myrrh.

Epiphany, meaning to show or to manifest, celebrates that these Magi, who were Gentiles, recognized Jesus, even as an infant, as the savior and so shows that Jesus came to save all mankind, not just the people of Israel.

Carnival, or Mardi Gras season, is synonymous with King Cake season.  The tradition of the King Cake was brought to New Orleans from France.  The King Cake is an oval-shaped cake that mimics the crown of a king as well as the unity of people.  The cake is decorated in royal colors of Purple, signifying Justice, Green, signifying Faith, and Gold, signifying Power.

The cake has within it a tiny plastic, or in some cases porcelain, baby, signifying the baby Jesus.  Tradition is if you receive the piece of cake with the baby, and as King for the day, you will host the next party and provide the King Cake.

May we all have a blessed and happy 12th Knight and traditional celebration of the Epiphany.