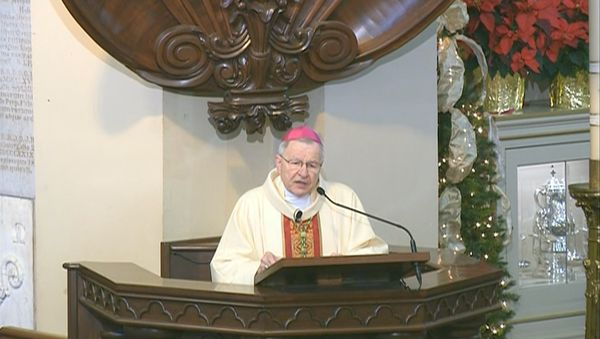 Archbishop Gregory Aymond celebrated a Memorial Mass today at St. Louis Cathedral for Pope Benedict XVI who died Dec. 31 at the age of 95. It was Pope Benedict who assigned Archbishop Aymond to be the Archbishop of New Orleans and from whom Archbishop Aymond received his pallium in 2009.
During the homily, Archbishop Aymond read out Pope Benedict's “spiritual testament,” the traditional “parting words” to the Church written by popes and read publicly after their deaths. The archbishop said Pope Benedict articulated four main points in this final message:
• First, Pope Benedict thanked God for being faithful, even in the darkest of times, and spoke of his gratitude for the love and encouragement shown to him by his family, friends and those with whom he ministered.
• Secondly, Pope Benedict implored “To those I have wronged in any way, I heartily ask forgiveness.”
• Pope Benedict asked the faithful to stand firm in their faith and always work toward unity in the church as one Body of Christ. Disunity in the church is “not of God.”
• Finally, the late pope asked the people of God to “pray for me, despite my sins and my insufficiencies."
The archbishop said that although Pope Benedict was the first pontiff to resign in 600 years, his stepping back from public ministry was "an incredible act of humility” because he recognized that he was no longer able to "physically or emotionally" do what was expected of him.
But rather than making his resignation the main memory of Benedict’s papacy, Archbishop Aymond asked local Catholics to also remember the man’s “tenderness of heart” and dedication to being a man of prayer.
“Read his writings, read his teaching and listen to his preaching. He had a unique relationship with God,” Archbishop Aymond said.
"You and I, like him, are called to be disciples … with one eye on the present and one eye on heaven. This earthly life is temporary. Take it seriously, but not too seriously, because this is not our final home.”
Posted by Deacon Mike Talbot at 2:17 PM