Pope to new Bishops: Be open to dialogue and close to poor

On Monday morning Pope Francis met privately in the Apostolic Palace with around 200 newly ordained Bishops over the past year taking part in the second session of a formation course taking place at the Regina Apostolorum Atheneum and organized by the Dicasteries for Bishops and for Eastern Churches.

The private audience of Pope Francis with the Bishops marked an informal meeting, with all seated in a circle, consisting of testimonies, suggestions, and encouragement to serve the poor. The meeting topped off days dedicated to 'learning' how to be bishops, the challenges to face, and the issues to bring forward.

Around 200 new bishops participating in the formation course organized by the Dicasteries for Bishops and for Eastern Churches met with the Pope on Monday morning in the Clementine Hall. The meeting was confidential so as to allow free conversation between the Pope and the Bishops, many from Latin America. Those present consisted of participants in the second session of the course from 12-19 September held at the Regina Apostolorum Athenaeum in Rome. 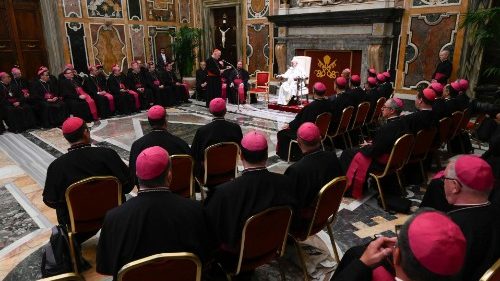 Course for new Bishops concludes, a 'wonderful' occasion of unity

Caring for the poor

The first session, which took place earlier, from 1-8 September, opened with a Mass celebrated by Cardinal Pietro Parolin, Secretary of State. The course was divided into two sessions given the high number of participants and Covid restrictions that required it. Pope Francis received the participants of the course - a tradition that began in 2000 during the pontificate of John Paul II - and dedicated this year to the theme "Proclaiming the Gospel in the Changing Epoch following the Pandemic: the service of the bishop."

Also then, the Pope did not have a prepared address, but held a confidential discussion, as Bishop Angelo Ademir Mezzari, Auxiliary of São Paulo, told Vatican News. He said the Pope welcomed those present with a message, namely not to forget the need to be close to the poor, knowing that everything is interconnected and everything needs care on this planet. Then he wanted to listen directly to his brother bishops, their stories, their situations, and requests. The meeting lasted about an hour and a half.

The same type of meeting took place on Monday morning in a "synodal" atmosphere, according to Brazilian Bishop Maurício da Silva Jardim, who will assume the leadership of the Diocese of Rondonópolis-Guiratinga on 23 October. "Synodal," the prelate explains, also marked the atmosphere of the week's work at the Regina Apostolorum, when in light of Pope Francis' magisterium, the speakers focused on a central theme and then gave the floor to the assembly, then invited to "express itself, raise concrete issues and problems of today, such as hunger, violence, social inequality, migration, political and health crises, ethics and social issues around the world." The new Brazilian bishops were also able to bring to the attention of the course participants and the Pope, the major issues that mar the face of the Amazon, such as mining, exploitation, and illegal deforestation.

During the formation course, some of the Pope's writings - Amoris laetitia, Fratelli tutti and Laudato si', in particular - were then explored in depth. Then some of the cornerstones of the pontificate became the focus, such as the family and universal fraternity through integral human promotion. Bishop Jardim says it was, "an opportunity to walk together on different fronts, encouraging us to be 'pastors of the people' and offering ideas on how to act in our dioceses, following the principle established by Pope Francis of a missionary, synodal Church of communion and participation."

Audience to Bishops from mission lands 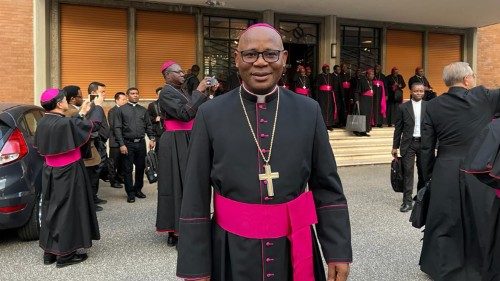 Pope Francis met with another group of Bishops in audience last Saturday, Bishops from mission lands who participated in Rome in another training seminar, one organized by the Dicastery for Evangelization. In an open dialogue also in a private audience, the Pope urged the Bishops to always deepen their relationship with the Lord, their communion among Bishops and with their priests, while being close to the faithful. The vicar apostolic of Caroní in Venezuela, Bishop Gonzalo Ontiveros, told Vatican News that the bishops had the opportunity to share their experiences of missionary work with the Pope, thus giving the Pope food for thought. In particular, the Pope reiterated the importance of prayer in episcopal ministry, because if a bishop does not pray, he distances himself from God and "withers away." Also, Bishop Ontiveros said the Pope called for greater unity among bishops as "brothers in the episcopate" and to draw close to their priests, co-workers, and parish communities: "Answer them, call them. Be attentive to their needs," the Pope said. Also among the recommendations were to avoid protagonism, self-referentiality, and proselytism, which is different from "evangelization" to be carried out "in the style of Jesus."

Posted by Deacon Mike Talbot at 9:50 AM