The Pope's almoner travelled to Ukraine for the fourth time since the beginning of the war to bring the Holy Father's closeness and solidarity to the suffering people. In one particularly poignant moment he was able to pray before the mass graves discovered near the besieged city of Izium that had been occupied by Russian forces.

Speaking just two days after having been caught in crossfire while delivering humanitarian aid near the city of Zaporizhzhia, Cardinal Konrad Krajewski described the grief pervading the site where at least 400 “unmarked” graves have been found just outside the eastern Ukrainian city of Izium.

"There are neither words, nor tears", the Papal almoner said, adding that only prayer can alleviate the heart so burdened by pain. 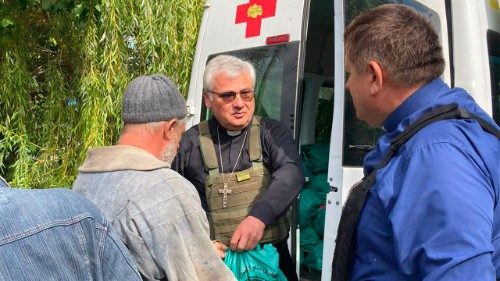 Cardinal Krajewski under fire near Ukraine's frontlines: ‘Jesus, I trust in you’

Cardinal Krajewski recounted how he spent the morning, together with Bishop Pavlo Honcharuk of the Kharkiv-Zaporizhzhia Diocese, in Izium, a locality previously occupied by Russian forces where the remains of some 500 people have been found.

"There we witnessed a 'celebration' - we can say - during which some 50 young men, mostly policemen, firemen, soldiers dressed in white overalls, were digging and carrying away from the graves – many of them common graves - the bodies of Ukrainians who were killed some 3-4 months ago, some of them just recently buried", he said.

Dumbfounded by such horror

“One is dumbfounded by such horror”, the Polish Cardinal continued, saying that even if you know there is war and that “war knows no mercy”, seeing so many dead altogether causes feelings that are very difficult to express.

He described the work of those who unearth and carry the bodies in silence, with "moving and touching participation.”

"One thing that touched me deeply”, the Cardinal said, “was to see these young Ukrainians carrying the bodies in such a delicate way, so quietly, in total silence. It looked like a ‘celebration’. No one spoke, but there were so many policemen and soldiers there... At least 200 people. All of them in silence, with an incredible appreciation for the mystery of death. Truly there was so much to learn from them.”

A lesson in love and mercy

He said the way they carried the bodies was as if they were doing it for their own family members… “for their parents, children, brothers…”.

He said that together with the Bishop they walked among them reciting the Chaplet of the Divine Mercy over and over. They spent at least three hours doing this and reiterated that it was a “celebration of mercy”, a totally gratuitous gesture.

Cardinal Krajewski said the experience has stayed with him even having left the site, and that now he is back in Karkhiv, he stands in the chapel and thinks of those young people: “It was a difficult day, also marked by a visit to a police station that had been used as a torture chamber.”

A balm on the wounds of war

The Cardinal took time to reiterate how the men at the site “showed the beauty that is sometimes hidden in our hearts.”

“They showed a human beauty in a place where there could be only revenge. But no: I was reminded of the words of the Holy Scriptures that tell us that evil must always be overcome with good. A certainty that is balm on the wounds of this war,” he said.

Cardinal Krajewski is currently in Kiyv from where he departs for Rome after having delivered aid in the Zaporizhzhia area together with two other bishops, one Catholic and one Protestant, accompanied by a Ukrainian soldier.

That is where he was caught in the crossfire and luckily escaped unharmed. In the end, he said, everything went well, no one was injured, and all the aid was delivered, even the rosaries blessed by the Pope.