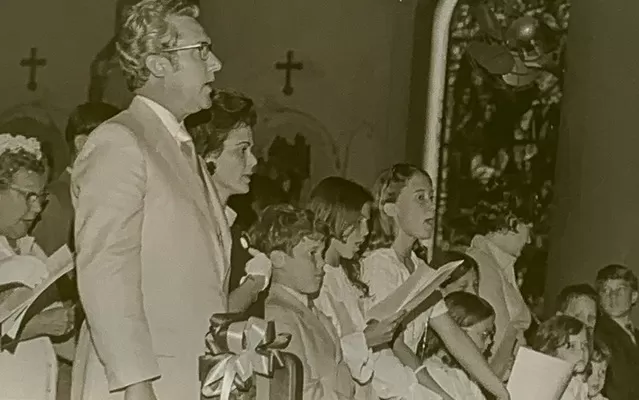 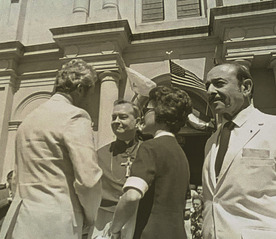 Dear Loyola community,I am writing to share with you the passing of the Honorable Maurice “Moon” Landrieu, who died peacefully at home on Labor Day at 92 following an extraordinary life. Our hearts and prayers go out to his family and friends, especially his wife of 68 years, Verna Satterlee Landrieu, whom he met right here on campus as a young man, his nine children, including College of Law Dean Madeleine Landrieu, and his 37 grandchildren and 15 great-grandchildren, many of whom continue to grace our campus in various ways. As many of you know, Moon Landrieu has long been publicly celebrated as one of the university’s most prominent and decorated alumni, having served two terms as Mayor of New Orleans during the 1970s, and served as U.S. Secretary for Housing and Urban Development under U.S. President Jimmy Carter. This, in addition to his service as a New Orleans City Councilman, Louisiana State legislator and Louisiana state appellate judge. His leadership goes down in history. He stood up to anti-integrationists as a young man, led the city at a pivotal time of desegregation, and—together with his family—helped with the recovery and rebuilding of New Orleans following Hurricane Katrina, among myriad achievements. Even in his 90s, he provided valuable counsel to all manner of public servants, from local city staff to university and U.S. presidents.

But to hear him and the Landrieus tell it, everything that mattered to him most, starting with his large and loving family, is somehow tied to Loyola. He often shared that his time here as a student working with the Jesuits especially opened his eyes to injustice—and called him to a life of service and doing for others. At Loyola, he formed remarkable and lifelong friendships, including best friends Dr. Norman Francis (for whom we will name the Francis Family Hall in October) and the late Louisiana Supreme Court Chief Justice Pascal Calogero. These men, each in their own way, drew on their God-given talents and legal skills gleaned on our campus to help drive incredible and important change for Loyola, our city, state, and nation.

A bench outside Marquette Hall celebrates the most important friendship of all. Dedicated to “where it all began,” it’s a permanent marker of an incredible love story. Moon Landrieu—who famously pitched for the Jesuit High School varsity baseball team, then joined the Wolf Pack on a baseball scholarship in 1948—liked to joke that he started hanging around the Student Government Association, (and later became its President), so he could get to know Verna, a student leader and scholar devoted to her faith. They married in 1954, following Moon’s law school graduation, and had nine children in 11 years.

All of the Landrieu children are called to some form of service, whether privately or in the public eye— including former U.S. Senator Mary Landrieu; former Lieutenant Governor and New Orleans Mayor Mitchell “Mitch” Landrieu, who now serves as a special adviser to President Joe Biden; Madeleine, our law dean and a former state court appellate judge, and Maurice, Jr., Assistant U.S. Attorney for Orleans Parish. Many of them are also members of the Wolf Pack.Four Landrieu children—Mitch, J.D. ‘85, and his wife Cheryl Quirk ‘85, Madeleine, J.D. ‘87 and husband Paige Sensenbrenner J.D. ‘87, Martin J.D. ‘88 and Maurice, J.D. ‘92— are graduates of the College of Law. Michelle “Shelley” Landrieu ‘81 majored in communications as an undergraduate.

Among the grandchildren, Erica Sensenbrenner Bergeron J.D. ‘18, and her husband Nick Bergeron J.D. ‘17, Tyler Landrieu J.D. ‘18, and Kristen Landrieu, J.D. ‘20 recently graduated from the College of Law, where Adam Landrieu is now a student. Mary Frances Seiter received her MBA from Loyola last spring and now works at the law school. Her brother Charlie Seiter, who graduated in 2019 and received the Ignatian Award for Outstanding Senior, played Varsity Baseball for the Wolf Pack. Sisters Jennifer Barkley Youngberg ‘11 and Victoria Barkley ‘14 also graduated from Loyola. Over the years, Loyola has honored Moon Landrieu many times and in many ways, bestowing on him our highest honors, including two honorary degrees and the Integritas Vitae, Adjutor Hominum and St. Ives Awards. And he honored us, teaching and speaking at the law school, mentoring students, leading projects and calling us to service.On the day of the funeral, we will honor him one more time by lowering the flag to half mast and ringing the bells of Holy Name of Jesus Church of Jesus Church, where he will be celebrated with a funeral Mass for a life well lived. With prayers,Father Justin Daffron, S.J.
Interim President
Loyola University New Orleans

Posted by Deacon Mike Talbot at 11:59 AM