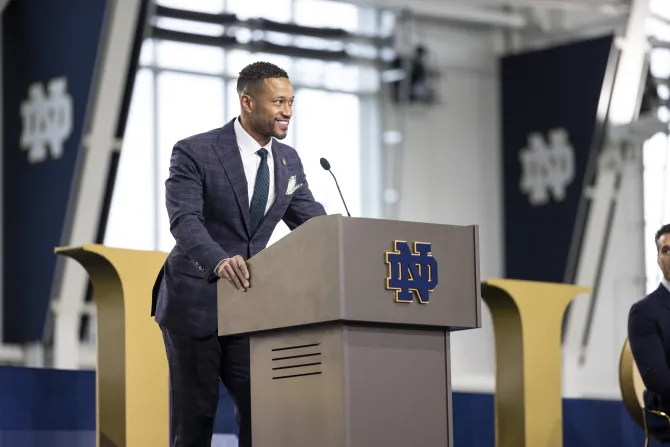 Marcus Freeman, the new head football coach at the University of Notre Dame, has reportedly converted to the Catholic faith, a process he began since his arrival in South Bend, Indiana.

According to the announcement, Freeman was “received into the Catholic Church after preparing with Father Nate Wills, C.S.C., chaplain of the Notre Dame football team.” It was accompanied by a photo of the 36-year-old football coach and four priests, including Father John Jenkins, C.S.C., the university’s president.

“Marcus made a profession of faith, was confirmed, and received his First Holy Communion. Please pray for Marcus and his family as they celebrate and continue this journey in faith!” the announcement said. According to sources, Freeman entered the Church at the end of August, before the start of the football season.

In an interview with the National Catholic Register published Aug. 31, Freeman, who was a Christian before his entrance into the Catholic Church, said that he was grateful to be at Notre Dame because of the school’s emphasis on faith.

“That’s important for me. I want our guys to wonder about what it means to embrace Jesus Christ,” Freeman told the Register.

Once again, for home games, the team will go to Mass together at the Basilica, leave through the “God, Country, Notre Dame” door, and walk across campus to Notre Dame Stadium. One of Kelly’s reforms had been to reschedule the team Mass for the night before games.

Freeman had fond memories of attending a pre-game Mass he attended as a high school recruit from Huber Heights, Ohio. At a press conference marking the beginning of practice last spring, he said he was “caught by surprise” to learn that the team no longer followed the tradition.

“It’s what I remember from my recruiting trip — watching the players walk out of the Basilica on the way to the stadium. I was a little caught by surprise when we didn’t do it last year,” he said, adding that he was restoring the tradition. Freeman did not end up attending Notre Dame, electing to go to Ohio State instead.

Freeman discussed with the Register why he thought it was important for the team to attend Mass together before games.

“To me, what better time is there to go have Mass?” he said. “What better time to be able to really be on the edge of your seat to get every word that comes out of the priest’s mouth and to be as close to God as you can?”

Freeman and spokespeople for Notre Dame and St. Pius X Church were not immediately available for comment Wednesday.

Posted by Deacon Mike Talbot at 11:41 AM