American actress Patricia Heaton, famous for her roles in film and television - including her Emmy-award-winning turn in the American sitcom "Everybody Loves Raymond" - speaks with Vatican News about her Catholic faith, meeting with Pope Francis at the recent VITAE Summit in the Vatican, and being a Catholic actress in Hollywood.

American actress Patricia Heaton is grateful to Pope Francis for encouraging their work and feels empowered to continue living out her day-to-day Hollywood endeavours with authentic Catholic values.

These were some takeaways expressed to Vatican News by the actress, who had participated in the two-day Vitae Summit in the Vatican's Casina Pio IV on Thursday.

“My sister is a Dominican nun. My grandparents met Pope John Paul I. My mom was one of 15 children. I have some 100 first cousins on my mom's side. So, we're a very Catholic family. Meeting the Pope is such an incredible honor that I never thought I would have.”

She described her time with the Holy Father as incredibly special.

Asked whether she finds it challenging to be a Catholic actor in Hollywood, Ms. Heaton said, “God has been very gracious to me", noting she never had to to be "morally compromised" in her shows. 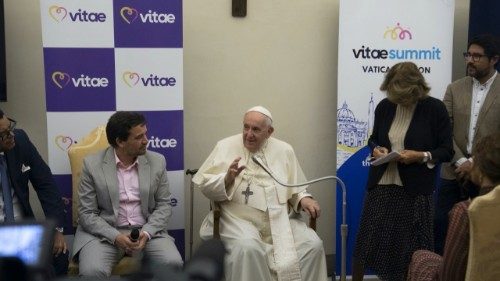 Being a Catholic in Hollywood

“As much as people want to paint Hollywood as a sort of anti-religious place, I have found that going into work, we're all there to do a job. We're all there to be professional. We all respect each other. We share opinions, different opinions. And because we love each other and we have a common goal of creating something wonderful for people to enjoy, the differences in our religion or politics or whatever, in my experience on a set, have not been a problem.”

“I've always felt that I've been able to be open about who I am and what I believe.”

Reflecting on her time in the Vatican, she recalled the privilege of having a private tour of the Sistine Chapel, and being constantly surrounded by beauty within the Vatican walls.

She was particularly moved by her and the other actors’ time with the Pope on Thursday afternoon.

Bringing message of God's love for all

“Pope Francis talked about bringing beauty and truth to the world. And we are privileged to be creators, as God is Creator and has gifted us, in a small way, for each of us to be able to hopefully bring some truth and beauty to the world, to a world which is very divided right now, a world that is filled with trouble and poverty and war.”

“We need this message of God's love for all of us, of His beauty and His truth and the love that Christ has for all of us. We need that even more.”

She suggested how worthwhile it is to have Pope Francis acknowledge that, to be all together in the room, encourage each other, and make those connections.

“Hopefully, out of this," she said, “we will be creating shows and music and art that will lift people up and open their hearts to the belief that God cares about them.”

Christ does the work

Ms. Heaton concluded by expressing how she entrusts her work to Christ.

“And that at the end of the day, as Christ said, 'It is finished.' He's done the work. We are going toward victory. We just have to get through these battles and we can do it together.”