The ongoing saga of Pope Francis and knee pain, loss of mobility

Knee pain places unusual limits on Francis, a pope used to being a 'street priest' 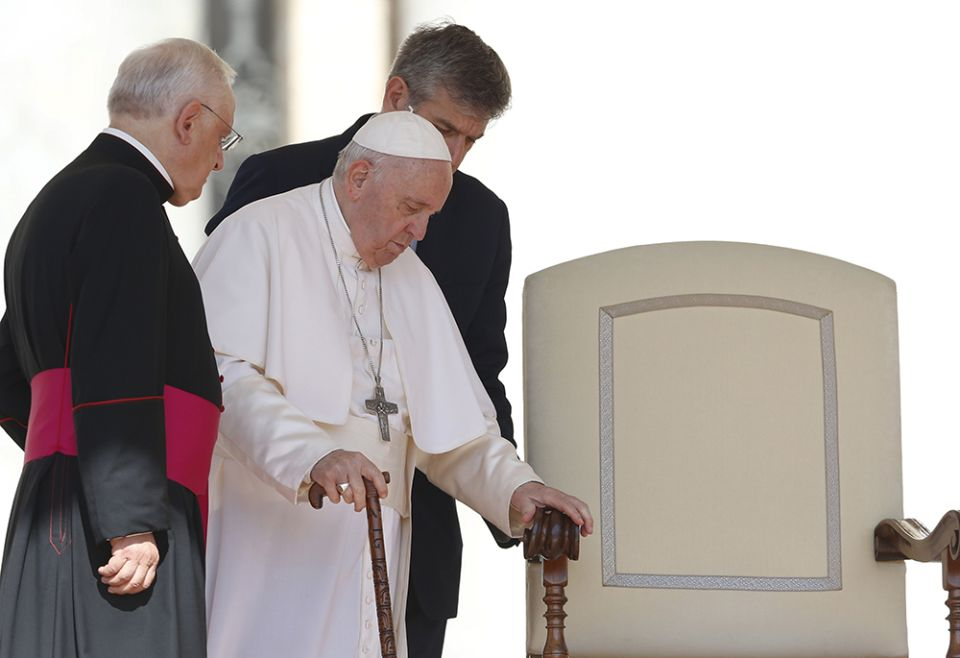 ROME — A pope is always well, goes an old Vatican joke, until he dies.

"But that was only true until television cameras arrived," says Villanova University church historian Massimo Faggioli. "Now it is more complicated."

And complicated also seems to be an apt description of recent months for Pope Francis, who recently had to postpone plans to travel to Congo and South Sudan in early July due to problems with his knee.

In February, Francis began a new series of reflections on old age during his weekly general audiences, a subject matter that has brought a sharp focus on his own physical limitations that has ushered in a new phase of his papacy.

The 85-year-old pope has acknowledged this directly, telling the audience gathered for his Wednesday general audience on June 15 that the elderly "cannot do the same as what we did when we were young."

"The body has a different rhythm, and we have to listen to the body and accept limits. We all have them," he continued. "Even I have to go with the cane now."

Less than one week after Francis began his weekly meditations on aging, he was forced to cancel a day trip to the Italian city of Florence, citing knee pain. During his April trip to Malta, he boarded the airplane via an automated lift, rather than stairs, marking a first in his 36 international trips since being elected pope in 2013.

When Holy Week arrived, Francis was forced to limit his participation in the Vatican's public liturgies, and, on May 5, he appeared in public using a wheelchair for the first time, which he has regularly used since.

In recent weeks, Francis' limited physical mobility, along with the announcement that he would travel to the Italian city of L'Aquila in August — a place filled with symbolism as the burial place of St. Celestine V, a 13th-century pope who abdicated the papacy, and as where Pope Benedict XVI visited in 2009 before his own resignation four years later — have fueled speculation that Francis might be planning to do the same.

But Francis, who has long suffered from sciatica and who reportedly told Italian bishops last month that "governing takes a head, not legs," is just the latest in a series of popes who have endured a physical decline in the public spotlight.

In 2013, at the age of 85, Benedict shocked the world by announcing he would voluntarily resign.

"After this precedent was set, this means that every pope can resign more easily, and it has become more complicated to make any predictions about time and modality of the end of a pontificate," said Faggioli.

"When the end of a pontificate coincided with death, it was more predictable. Now, it is up to the individual," he continued. "It is no longer nature that decides."

Christopher Bellitto, a professor of history at Kean University in New Jersey, who has written extensively on the history of the papacy, said that he believes Benedict made his decision in large part due to what he observed during the final years of Pope John Paul II's life.

John Paul, who suffered from Parkinson's disease and had difficulties moving and speaking in his later years, effectively relied on his personal secretary, now Cardinal Stanisław Dziwisz, to manage his affairs as he increasingly became debilitated until his death in 2005 at age 84. Dziwisz's vast powers and unchecked decision-making on a range of issues, from clergy abuse to financial matters, has been under much scrutiny since that time.

Benedict — who first used a cane in public about a year before he resigned — "said, in essence: 'I'm not going to let that happen to me and certainly not to the church,' " according to Bellitto.

"The wider issue is whether someone can do the job and the messages the popes are sending," Bellitto said, adding that John Paul II's condition was "much more physically debilitating on a broader physical scale than a bad knee and sciatica."

Other popes over the last centuries have suffered a range of setbacks, some public and others kept hidden.

"Popes are always a bit secret about their health," said Jesuit Fr. Oliver Rafferty, an historian at Boston College. "This is true of all leaders of the church and state because the idea is that if you're ill, it gives greater opportunity for your opponents to criticize you and say, 'he's not up to the job.' " 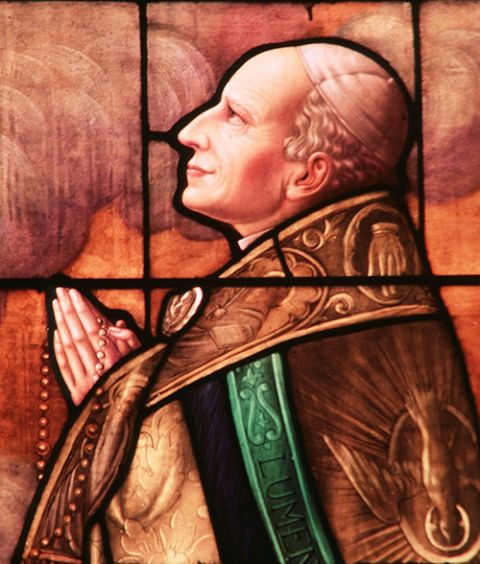 Leo XIII, who served as pope 1878-1903, is depicted in a window at Holy Family Church in Mitchell, South Dakota. (CNS photo from Crosiers)

Rafferty recalled that Pope Leo XIII was already in poor health when he was elected at age 68 in 1878 — a fact the historian noted likely got Leo XIII elected, as the cardinal electors assumed it would be a short pontificate.

Instead, Leo XIII would go on to become one of the longest serving popes in history, living until the age of 93.

During Leo's papacy, the pope had trouble walking and was forced to use a cane, which Rafferty noted was mocked by some cardinals. In 1889, at the urging of his secretary of state, Cardinal Mariano Rampolla, Leo eventually had surgery and the doctors removed an "enormous" cyst from his body, greatly improving his mobility and overall health until the end of his life.

Pope Pius XII, who died in 1958 at age 82, began to have serious health setbacks beginning in 1954, suffering from a degenerative disease. While his mobility was not impaired, an experimental doctor from Switzerland gave him injections from sheep glands.

"The general consensus [about the doctor]," said Rafferty, "is that he was something of a quack," and that Pius suffered tremendous night terrors and incessant hiccups as a result of the treatment.

Rafferty also noted that Pope John XXIII was diagnosed with stomach cancer in September 1962, but only informed a tight circle of advisers about his condition. While the pope hinted in April 1963 that his death was near — it would come that June — photographs in the early months of 1963 appear to provide evidence of a pope who was clearly ill. 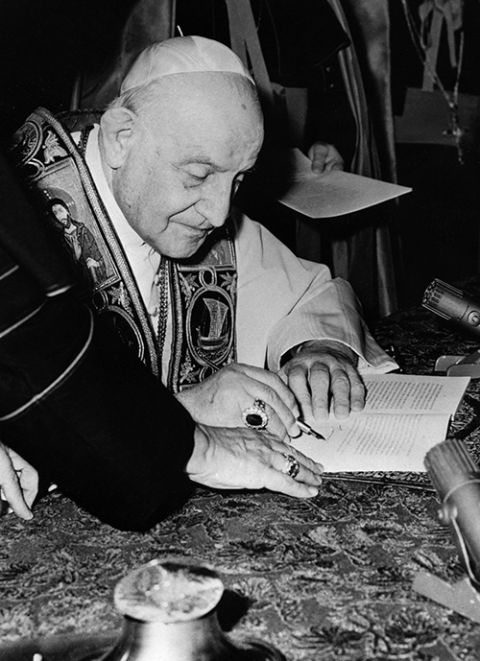 Pope John XXIII signs his encyclical "Peace on Earth" ("Pacem in Terris") at the Vatican in this 1963 file photo. (CNS photo)

Fáinche Ryan, a religion professor at Trinity College Dublin, told NCR that Pope Francis' papacy has echoes of John XXIII's pontificate, which initiated the Second Vatican Council, in that even while declining in health, he continued to initiate important reforms in the church.

Francis' reforms, she said, might be termed "radical" by some, but are "clearly rooted in the tradition of the church," particularly Vatican II. Moreover, she noted that Francis' current condition also helps "emphasize his decentralized understanding of leadership."

Even Pope John Paul I, who died of a heart attack at the age of 65 only 33 days after being elected pope in 1978, had his legs examined two weeks before his sudden death. While his symptoms were not made public at the time, swollen legs can be a sign of degenerative heart disease, said Rafferty.

Faggioli said these historical cases are not as well known in part because "the pope was not as visible as he is today" and because so much of the pope's activities took place inside Vatican walls and not in the public eye.

Today, almost every papal meeting is documented by a photographer and all major papal events take place in front of the lens of cameras from around the world.

"Back then, popes used to speak only through official Vatican media channels and only sporadically," Faggioli noted.

One measure in which Francis is communicating well, despite poor health, according to Cambridge University historian Rosamond McKitterick, is in "eloquently" communicating that while many elderly people suffer limitations, it does not mean he is unable to fulfill his spiritual duties of office.

"The church may have to think of how to support the pope and devise a new formula to describe those who are called on to help in some of the more physically demanding aspects of the papal role," she advised, as well as finding ways to ensure that such individuals do not exert an undue influence.

Both Faggioli and Rafferty noted that John Paul II "revolutionized" the papacy by traveling to 129 different countries, and since then, both Benedict and Francis have followed in the new tradition of papal jet setting.

For Bellitto, however, the fact that a pope cannot travel as easily as he once did, does not necessarily mean he cannot do the job.

"Francis has canceled trips, which is a giant disappointment of course, but we're in a new era where communications allows him to speak directly to gatherings anywhere around the world," Bellitto added. "A poor substitute to human interaction, yes, but possible."

And while Faggioli agreed that travel is not required by the job, he stressed that it would be difficult for someone like Francis, who has expressed great delight in being able to get outside of the Vatican and near to the people, to no longer be able to do so.

Francis was a "street priest," Faggioli observed, "who has become a street pope."

Posted by Deacon Mike Talbot at 10:20 AM