Another Monday Saint of the Day 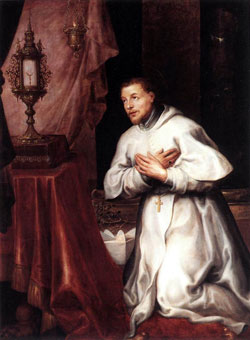 St. Norbert was born at Xanten in the Rhineland, about the year 1080. The early part of his life was devoted to the world and its pleasures. He entered upon the ecclesiastical state in a worldly spirit.

The thunderstorm had boiled up suddenly as Norbert was out riding. Norbert, who had always chosen the easy way, would never have deliberately gone on a journey that promised danger, risk, or discomfort. He had moved easily from the comforts of the noble family he was born into at about 1080 to the pleasure-loving German court. He had no hesitations about joining in any opportunity to enjoy himself, no matter what the source of that pleasure. To ensure his success at court, he also had no qualms about accepting holy orders as a canon and whatever financial benefices that came with that position, although he did hesitate at becoming a priest and the implied responsibilities that came with that vocation.

But now high winds pushed and pulled at his fashionable coif, rain slashed at his fancy clothes, and dark roiling clouds pressed night down upon his light thoughts. A sudden flash of lightning split the dark and his horse bucked, throwing Norbert to the ground.

For almost an hour, the still form of the courtier lay unmoving. Even the rain soaking his clothes and the howl of thunder did not bring him back to consciousness and life. When he awoke his first words were, "Lord, what do you want me to do?" -- the same words Saul spoke on the road to Damascus. In response Norbert heard in his heart, "Turn from evil and do good. Seek peace and pursue it."

He immediately returned to the place of his birth, Xanten, to devote himself to prayer and penance. He now embraced the instruction for the priesthood he had avoided and was ordained in 1115. His complete conversion and new ways caused some to denounce the former courtier as a hypocrite. Norbert's response was to give everything he owned to the poor and to go to the pope for permission to preach.

With this commission in hand, he became an itinerant preacher, traveling through Europe with his two companions. In an extreme response to his old ways, he now chose the most difficult ways to travel -- walking barefoot in the middle of winter through snow and ice. Unfortunately the two companions who followed him died from the ill-effects of exposure. But Norbert was gaining the respect of those sincere clerics who had despised him before. The bishop of Laon wanted Norbert to help reform the canons in his see, but the canons wanted nothing to do with Norbert's type of reform which they saw as far too strict. The bishop, not wanting to lose this holy man, offered Norbert land where he could start his own community. In a lonely valley called Prmontr, began his community with thirteen canons. Despite the strictness of his regulation, or perhaps because it, his reforms attracted many disciples until eight abbeys and two convents were involved. Even the canons who had originally rejected him asked to be part of the reform.

In Norbert's community we have the first evidence of lay affiliation with a religious order. This came about when a count Theobald wanted to join Norbert. Norbert realized that Theobald was not called to holy orders but to marriage and worldly duties. But he did not entirely reject Theobald, giving him a rule and devotions as well as a scapular to wear to identify him as part of the community.

It was on the trip accompanying Theobald to his marriage, that Norbert was spotted by Emperor Lothair and chosen as bishop of Magdebourg. Legend has it the porter refused to let Norbert into his new residence, assuming he was a beggar. When the crowd pointed out to the flustered porter that this was the new bishop Norbert told the porter, "You were right the first time." Norbert carried the love of reform that he had found in his own life to his new diocese. As usual, this made him many enemies and he was almost assassinated. Disgusted with the citizens desire to keep to their old ways, he left the city, but was soon called back -- not because the citizens missed him but because the emperor and the pope pressured them.

When two rival popes were elected after the death of Honorius II, Norbert helped try to heal the Church by getting his admirer the emperor to support the first elected, Innocent II. At the end of his life he was made an archbishop but he died soon after on June 6, 1134 at the age of 53.