A deacon is a Saint for Monday 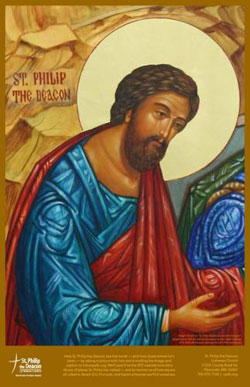 All that is known of Philip is what we are told in Acts in the Bible. He is one of the seven chosen to assist the Apostles by ministering to the needy members of the Church so the Apostles could be free to preach the Gospels. He was the first to preach in Samaria, where he converted Simon Magus and then a eunuch who was chief treasurer of the Queen of Ethiopia on the road from Jerusalem to Gaza. Philip preached in the coastal cities on the way to his home at Caesarea, and twenty-four years later, St. Paul stayed at his home in Caesarea, where he still lived with his four unmarried daughters. A Greek tradition has him become Bishop of Tralles, Lydia. He was so successful in his preaching that he was sometimes surnamed "the Evangelist," which has sometimes caused him to be confused with Philip the Apostle. His feast day is June 6.