Ahead of this week's World Meeting of Families

In an interview ahead of the World Meeting of Families set to take place in Rome this week, Cardinal Kevin Farrell, Prefect of the Dicastery for Laity, Family and Life, says Pope Francis wants the WMOF to be lived in local Churches around the world, and points to the holy examples of married couples who have become canonized saints.

With this week's 10th World Meeting of Families in Rome, Pope Francis wishes to embrace and engage all families around the world, and for this reason, he has asked for dioceses worldwide to also celebrate families locally.

Cardinal Kevin Farrell, Prefect of the Vatican's Dicastery for Laity, Family and Life, suggested this as he sat down with Vatican News for an interview ahead of the World Meeting. 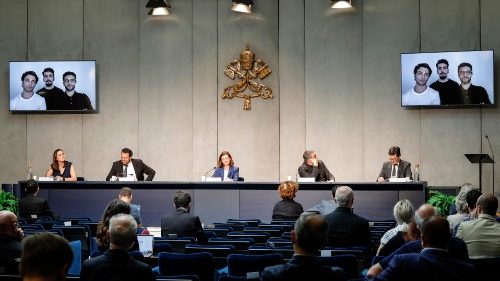 World Meeting of Families: A celebration of family love and beauty

The Prefect not only shares his hopes for the meeting and why this year will be particularly poignant, as wars rage around the world, but also reflects on how the pandemic has affected families.

Moreover, he draws attention to married couples who became saints, and discusses his hopes for his Dicastery's recently-issued document intended to help couples prepare for marriage and live their married and family life.

Here is a transcript of the interview with Cardinal Farrell:

Q: What are your expectations as we finally approach this World Meeting of Families after the pandemic had caused it to be postponed?

Cardinal Farrell: I believe that the pandemic certainly caused a great disruption in the pastoral life of the Church at all levels. And it was impossible for two years to gather groups of people together. It was impossible to organize in our churches, prayer meetings, conferences… It is therefore my hope that the World Meeting of Families that will take place in Rome will be an injection of vitamins into the Church.

In the past, we invited many families. We knew that many families would not travel during this time, and especially if they had young children, out of fear… And so, we invited representatives from all the dioceses in the world. We have representatives from every continent. These are the people who were in charge of family life ministry in the different dioceses, churches, parishes, lay movements, organizations who work in the field of marriage and family life. And so, it is our hope to inject a new sense of the importance of this change, in the way of doing things within the Church, in preparation for marriage and family life.

Q: In your role as Prefect of the Dicastery for Laity, Family and Life, how has the pandemic changed the nature of families and the nature of this meeting?

It has affected in a tremendous way the work of the Church in general and the work of our Dicastery. We have been speaking by Zoom for two years, but my experience of that, it's not the same as having a personal direct contact with the people involved. And Zoom tends to be one sided or two sided, but it is not a convergence of ideas around one particular point. But I hope that that is now past us in many parts of the world, even if not completely. I hope that once again, the Church will take up the question of family life, as Pope Francis always says. This is the central theme of the Church at the moment: marriage and family life. This is where we need to focus our attention. We do exactly as the Pope has requested us, to instill new life into it.

We have already published a book about the saint-couples who are beatified or canonized within the Church to prove that married life also has saints that everybody forgets about. We tend to remember the popes, the bishops, the martyrs and many other people...Two married couples, two, who have been beatified and canonized as saints in the Church, as couples. I think that is important.

The next point [is] that we have published the guidelines for the catechumenal path to prepare couples for marriage and families after marriage. And I would call it a kind of a 'vademecum' for bishops, priests and directors of family life ministry.

World Meeting of Families: A celebration of family love and beauty

On how we go about accompanying couples: Many people would like to jump to the first step, and the first step is you have to find couples who have the qualities to be able to accompany other couples. You have to identify the couples who have the ability to teach, correct, and minister to other people. Not everybody has every quality in the book. We have to select people who are good at what they're doing. That's an important point.

Q: Along with the World Meeting of Families, there are these new guidelines, do you expect them to be implemented in dioceses and put into practice as a concrete way to help couples and families...

Q: In what way will this year's Meeting remember the families where perhaps in their area or in their lives, religious repression has been a problem and families that are struggling in general?

This particular meeting is generally to focus on all of those themes that you mentioned that are always in the back of our mind and families. For example, we know that when the Pope greets those at the Festival of the Families, there will be couples there from Ukraine, too. [There] will be couples from many other parts of the world where there is religious persecution in many ways, and where there is violence and they live in a state of war.

Who can turn a blind eye watching the suffering of families, mothers with their children, while the fathers are left in Ukraine to fight, traveling to strange foreign countries that they've never been to before. They have no family members. They're totally on their own. And to see a young woman with two children, arriving...

We applaud in many ways what these countries have done, along with institutions, organizations, and Churches doing so much work to receive and help these immigrants and refugees.

But it's still it's not the same as being at home. And when your whole life is disrupted, you have nothing. People don't realize it's not like they moved all their household, as if they got one of these moving companies and moved everything. They go with a small bag and have nothing. And that's the way it tears away at your heart. The Church could not ignore that reality in the world. There will be families connected online from many parts of the world

Q: Pope Francis wrote to the Post Synod Apostolic Exhortation on the Family Amoris Laetitia. How would you describe the Church's current welcome and application of this document, and how will it be a useful tool during this meeting?

Obviously this is the basis. Amoris Laetitia is the basis of this meeting. It's our intention to give it, as I said before, a new impulse. I think it has been received relatively well in the Church in general. I think there was an awful lot of apprehension and misunderstanding at the beginning because people were insisting on one part or another part, but not reading the document in its totality. I think that in general, Bishops’ Conferences are supportive. I think some dioceses in some parts of the world have done much more, too.

For example, Pope Francis wanted this world gathering of families to be limited because of the pandemic situation here in Rome, but at the same time to be held in every Church and every parish in the world.

Many dioceses have prepared programs and sent us enormous amounts of literature about what they're doing or what they can do from all over the world. And I was pleasantly surprised to see so much activity taking place.

I should say that Pope Francis had the same idea about celebrating the World Day of Grandparents and the Elderly. He didn't want just one big celebration in one part of the world.

He wanted it celebrated in every cathedral in the world. Because even with the world gathering and the families, you've got to remember always that the most attended world gathering of the families that we've had was in Dublin. That was 34 or 35,000 people. That's not even a small little diocese in the world. Large dioceses around the world could gather that number of people in their own diocese. That's what we want. And that's why we invited all the leaders of it to this event here in Rome.

Q: What do you expect to be the highlights of this meeting in particular? And how is the venue - the fact that the world meeting is taking place in Rome - significant?

It's significant because [of] the Pope. Pope Francis is loved. He's the biggest attraction that we have. No matter what newspaper, no matter from what religious sect or organization - everybody likes Pope Francis. I think that when he speaks to the families and directly to married couples, they listen. My greatest expectation is that this will be broadcast all over the world. We hope that it will.

Posted by Deacon Mike Talbot at 8:50 AM