The protests by the pro-abort, pro-death crowd did begin, this one in Los Angeles 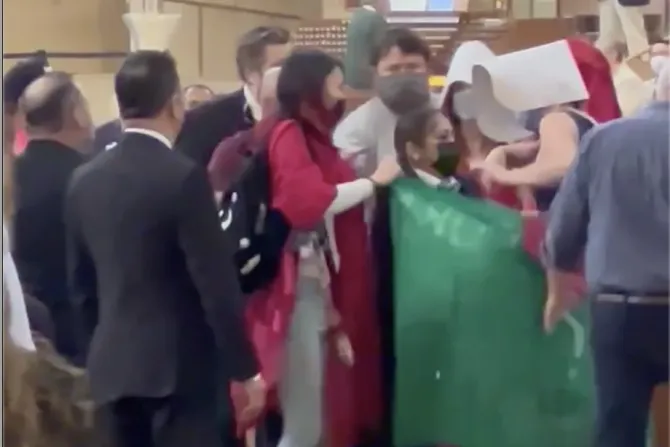 Several protesters dressed in "huge hats" and "red, hooded gowns," disrupted a Mass at the Cathedral of Our Lady of the Angels in Los Angeles Sunday morning, a parishioner told CNA.

The description of the protesters' attire provided by the parishioner, Bradford Adkins, resembles costumes worn by members of the pro-abortion group Ruth Sent Us, which threatened to disrupt Catholic Masses on Sunday, Mother's Day.

As of 10 p.m. EDT on Sunday, the group did not appear to have taken responsibility for the protest in Los Angeles. Representatives of the group did not respond to CNA's request for comment prior to publication.

A video posted on Twitter captured the incident, which took place at the cathedral's 10 a.m. Mass. Adkins told CNA the demonstration began to unfold shortly before Communion.

Ruth Sent Us has taken responsibility for disrupting Catholic churches before, such as at the Cathedral of St. Mary of the Assumption in San Francisco in February. During Mass at St. Mary's, video footage shows protesters walking down the aisle toward the altar wearing red robes and white bonnets or “handmaids” costumes frequently worn by abortion activists. The costumes symbolize enslaved women who are raped and forced to give birth, inspired by Margaret Atwood’s 1985 dystopian novel, “The Handmaid’s Tale.”

The group's threat to disrupt Mother's Day Masses came in response to a leaked draft opinion in a Mississippi abortion case that suggests a conservative majority on the Supreme Court may be ready to overturn the landmark 1973 abortion decision Roe v. Wade. The group tweeted a new threat Saturday, this time saying it intended to burn the Eucharist.

While there were a handful of reported incidents of anger, violence, and provocation directed at Catholics and pro-life groups over the Mother's Day weekend, the demonstration in Los Angeles appeared to be the only one similar to the protests Ruth Sent Us has conducted in the past.

Adkins told CNA that when he heard five of six women protesters yelling in front of the church near the altar, he feared that a riot may be ensuing.

“I was getting ready for a stampede and I glanced near the exits,” he said. He said the women held a large green banner, though he could not see what it said.

In one of the videos of the incident, one of the men who confronted the protesters can be heard saying, "Respect us, respect us."

A spokesman for the Los Angeles Archdiocese confirmed the incident to CNA late Sunday. The cathedral is the mother church of the archdiocese.