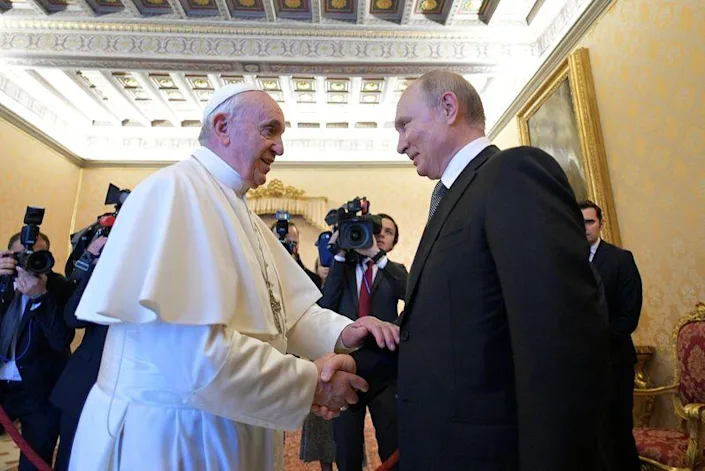 LONDON (Reuters) -The Russian Orthodox Church scolded Pope Francis on Wednesday for using the wrong tone after he urged Patriarch Kirill not to become the Kremlin's "altar boy", cautioning the Vatican that such remarks would hurt dialogue between the churches.

The Russian Orthodox Church said it was regrettable that a month and a half after Francis and Kirill, the patriarch of Moscow and All Russia, had spoken directly, the pope had adopted such a tone.

"Pope Francis chose an incorrect tone to convey the content of this conversation," the Moscow Patriarchy said, though it did not explicitly mention the "altar boy" comment.

"Such statements are unlikely to contribute to the establishment of a constructive dialogue between the Roman Catholic and Russian Orthodox Churches, which is especially necessary at the present time."

Kirill, 75, a close ally of Putin, sees the war as a bulwark against a West he considers decadent, particularly over the acceptance of homosexuality.

The Russian Orthodox Church is by far the biggest of the churches in the Eastern Orthodox communion, which split with Western Christianity in the Great Schism of 1054. Today it has about 100 million followers within Russia and more outside.

Francis, 85, has asked for a meeting in Moscow with Putin about Ukraine but the Kremlin said on Wednesday there was no agreement on this.

Russia and the West frame the conflict in Ukraine very differently.

Moscow calls its actions a "special military operation" to disarm Ukraine and protect it from fascists. Kyiv and its Western backers say the fascism claim is absurd and say Russia is waging an unprovoked war that threatens Ukraine's continued existence as a sovereign, democratic state.

The Moscow Patriarchy quoted Kirill as telling Pope Francis on March 16 that the Western media had failed to accurately report the situation in Ukraine - a frequent Russian complaint.

Kirill said the conflict in Ukraine had begun in 2014 when protests toppled a pro-Russian president. Kirill noted what he said was the persecution of Russian speakers in Ukraine's port city of Odesa. Ukraine denies any such persecution.

But Kirill also expressed sorrow over the conflict.

"Of course, this situation is associated with great pain for me. My flock is on both sides of the confrontation, they are mostly Orthodox people," the Patriarchy quoted him as saying.

"How can we foster the pacification of those fighting with the single goal of achieving the consolidation of peace and justice?"

Putin has also cited NATO enlargement to Russia's borders as a reason for the conflict in Ukraine despite what he says were assurances given as the Soviet Union collapsed that the alliance would not expand - an issue Kirill touched on.

"Patriarch Kirill further recalled that at the end of the Soviet era, Russia received an assurance that NATO would not move one inch in the eastern direction," the Moscow Patriarchy said. "However, this promise was broken."

The United States and NATO deny such assurances were given but say countries are free to apply to join an alliance they say is purely defensive and poses no threat to Russia.

(Reporting by ReutersEditing by Gareth Jones)

Posted by Deacon Mike Talbot at 10:28 AM