Pope to UISG: Recognise your own vulnerability and that of others

In an address to the International Union of Superiors General (UISG), Pope Francis invites women religious to reflect on St Peter and Mary Magdalene in order to put themselves at the service of others, and encourages them to make their own synodal journey.

This week hundreds of Superiors General have been exploring the theme "Embracing Vulnerability on the Synodal Journey," during the Plenary Assembly of the UISG.

Pope Francis focused on this theme in a speech addressed to Assembly participants on Thursday in the Vatican’s Paul VI Hall.

In his prepared remarks, which were handed out to those present, the Pope dwelt on some points for their discernment centred around two scenes from the Gospel.

The first is when Jesus washes Peter's feet at the Last Supper.

The Pope told the women religious that contemplating this scene “leads us to recognise both Peter's vulnerability and the vulnerability that Jesus assumes in order to go out to meet him.”

“Peter finds it difficult to accept that he needs a change in his mentality, a change of heart, that he must allow himself to have his feet washed in order to be able to wash the feet of his brothers and sisters,” he said.

By going out to meet him, explained Pope Francis, “the Son of God places Himself in a vulnerable position, in the position of a servant, showing how the life of Jesus can only be understood through service.”

Together with Peter, the Pope underlined, “the Church learns from her Master that, in order to be able to give her life in service to others, she is invited to recognise and accept her own fragility and, from there, to bow down to the fragility of others.”

Pope Francis invited the Superiors General to animate the life of their congregations and accompany discernment in their communities, “to enter into this scene of the washing of feet, walking this path of the Church, and to live their authority as service.”

The Pope also told the sisters that religious life today recognises its vulnerability, even if it sometimes accepts it with difficulty.

He went on to say that the place the Son of God wants to occupy by placing Himself at the feet of humanity is “a theological space.”

“Like Peter and with Peter, we are now called, after recognising our vulnerability, to ask ourselves what are the new vulnerabilities before which we, as consecrated men and women, must lower ourselves today.”

He also called on them to approach “the feet of wounded humanity” beginning with the sisters in their communities.

In the second Gospel scene, from Luke, Mary Magdalene is the protagonist.  “She knows very well what it means to move from a messy and fragile life to a life centred on Jesus and the service of proclamation,” the Pope said. 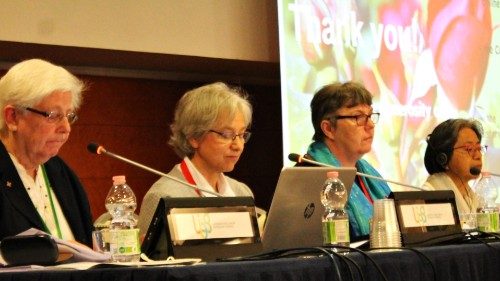 UISG during the ‘best of times and the worst of times’

Turning his attention to the synodal path, the Pope considered what is the contribution that the Church expects from religious life in the synodal journey of the Church.

He told those gathered that “if the synod is above all an important moment of listening and discernment, the most important contribution you can make is to participate in reflection and discernment.”

“Throughout this synodal process, be builders of communion, remembering the life and mission of Jesus.”

He also stressed the importance of congregations making their own synodal journey.

Concluding his address, Pope Francis said he was counting on the sisters “to accompany God's holy people in this synodal process, as experts in building communion, in fostering listening and discernment.”

He also expressed the hope that the “synodal process that we are living in the Church may also take place within your institutes, where young and old exchange their wisdom and visions of consecrated life."

Finally, the Pope acknowledged the concern about a lack of vocations and about ageing. On these issues, he said, “the important thing is always to be able to give a faithful and creative response to the Lord. Welcome the time in which we live as a gift from God, a kairos, for nothing escapes His hand.”

Posted by Deacon Mike Talbot at 10:34 AM