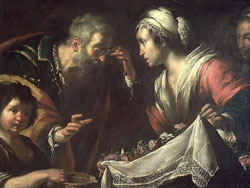 St. Zita was born into a poor but holy Christian family. Her older sister became a Cistercian nun and her uncle Graziano was a hermit whom the local people regarded as a saint. Zita herself always tried to do God's will obediently whenever it was pointed out to her by her mother. At the age of twelve Zita became a housekeeper in the house of a rich weaver in Lucca, Italy, eight miles from her home at Monte Sagrati. As things turned out, she stayed with that family for the last forty-eight years of her life. She found time every day to attend Mass and to recite many prayers, as well as to carry out her household duties so perfectly that the other servants were jealous of her. Indeed, her work was part of her religion! She use to say: "a servant is not holy if she is not busy; lazy people of our position is fake holiness." At first, her employers were upset by her generous gifts of food to the poor, but in time, they were completely won over by her patience and goodness and she became a very close friend. St. Zita was given a free reign over her working schedule and busied herself with visits to the sick and those in prison. Word spread rapidly in Lucca of her good deeds and the heavenly visions that appeared to her. She was sought out by the important people, and at her death in 1278 the people acclaimed her as a saint. She is the patroness of domestic workers. Her feast day is April 27.