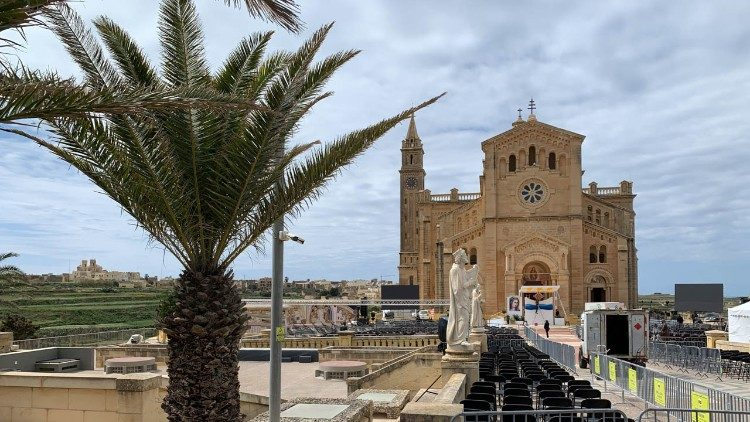 A visit to Malta's Marian shrine of Ta'Pinu

On Saturday afternoon, Pope Francis travels by boat to the island of Gozo to pray at the Marian shrine of Ta'Pinu, a place of great devotion for the Maltese, recognized and celebrated by several Popes, including Saint John Paul II and Benedict XVI.

Bishop Anthony Teuma of Gozo worked until the last minute to finish preparations for visit of Pope Francis to the Basilica of the National Shrine of Our Lady of Ta'Pinu, where the Pope presides over a prayer meeting on Saturday afternoon.

Ta'Pinu is considered the most important place of pilgrimage in the archipelago. Found at the tip of Gozo, the second largest island, the church appears at a curve in the road in the middle of rocky fields surrounded by low stone walls.

In 1883, there was only a simple chapel with a painting of the Blessed Virgin Mary. On 22 June, a farm laborer by the name of Karmni Grima heard a voice asking her to recite three Hail Marys, one for each day that Jesus remained in the tomb.

She later confided with a friend about this experience, and he mentioned that he also had heard this voice asking him to say prayers.

From then on, Ta'Pinu became a place of pilgrimage, and a new church was built around the ancient chapel where the Pope Francis on Saturday prays the three Hail Marys, as did St. John Paul II in 1990 during his pastoral visit. The Pope also places a golden rose there which joins the one given by Benedict XVI during his visit to Malta in 2010.

The square of the Minor Basilica is surrounded by walls covered with mosaics by Jesuit Father Marko Ivan Rupnik, representing the four mysteries of the rosary as an invitation to prayer and a meditation for pilgrims.

Gerard Buhagiar is rector of the Shrine, and takes care of every detail of the Basilica, including the flowers that adorn the altar located below a neo-Romanesque canopy.

He is proud of the talent displayed by the artists who hand-carved the stones drawn from the quarry below the sanctuary.

He shows the votive offerings filling the corridors behind the chapel, which display the gratitude of a whole community of believers, whose piety has made Ta'Pinu the most famous place of pilgrimage in the Maltese archipelago.