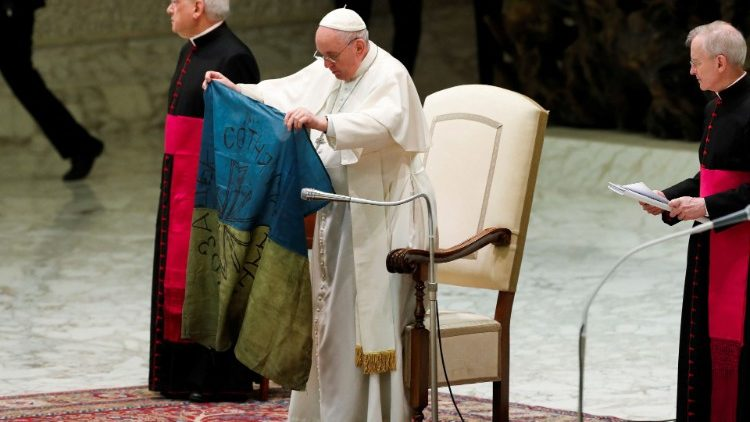 Pope Francis laments the massacre of civilians in the Kyiv suburb of Bucha during Russia’s occupation of the area, and renews his calls for an end to the war in Ukraine.

As the extent of the massacre of civilians in the Ukrainian town of Bucha continues to become clear, Pope Francis has lifted his voice to lament the human tragedy that occurred while Russian troops held the area.

Speaking at the Wednesday General Audience, the Pope said the killing of innocent civilians must cease.

“Ever more horrendous cruelties [are occurring], even against civilians, women, and helpless children. They are victims whose innocent blood cries out to heaven and implores.”

Pope Francis then renewed his appeal for an end to Russia’s war in Ukraine.

“May this war cease! May weapons fall silent. Stop sowing death and destruction.”

He also invited everyone to pray in silence for a moment to ask God for this intention.

The Pope said that on Tuesday he had received a Ukrainian flag from the town of Bucha.

He then unfurled the faded and war-stained flag and held it up for all to see, saying the flag “came from war, from that martyred city of Bucha.”

Child refugees: a ‘fruit of war’

Pope Francis added that several Ukrainian children—now refugees in Italy—were present at the General Audience, and he invited them to come up on the stage with him.

As he let the children return to their seats, Pope Francis noted that it is “difficult to be uprooted from one’s homeland.”

Bucha, a suburban town which lies to the northwest of Kyiv, was held by Russian forces from 27 February until 31 March when troops withdrew from the area. 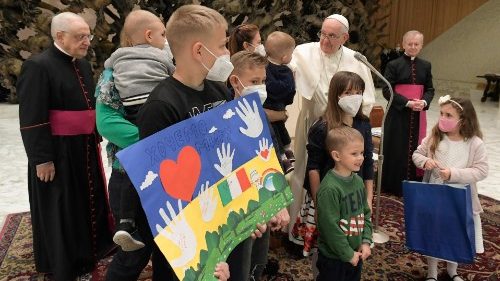 As Ukrainian troops entered the town—accompanied by members of the international press—apocalyptic-like scenes began to emerge of bodies piled together and burned, along with evidence of execution-style killings of unarmed civilians.

What was once a middle-class suburb has now become a grisly scene of torture and summary killings, with the town’s mayor saying over 320 civilians have been murdered there.

A mass grave has also been found, which could contain over 150 bodies. Satellite images show that many other corpses have lain out on the streets for weeks.

In response to the Bucha massacre, Western governments have ratcheted up sanctions on Russia, which claims the massacre is a hoax.

Posted by Deacon Mike Talbot at 9:07 AM