Pope to Patriarch Kirill: May we become peacemakers for Ukraine

Pope Francis sends his Easter greetings to Russian Orthodox Patriarch Kirill, and prays for the people of Ukraine as they long for a “new dawn that will end the darkness of war.”

“Dear Brother! May the Holy Spirit transform our hearts and make us true peacemakers, especially for war-torn Ukraine, so that the great Easter passage from death to new life in Christ may become a reality for the Ukrainian people, who long for a new dawn that will end the darkness of war.”

Pope Francis penned those words to the head of the Russian Orthodox Church, Patriarch Kirill, as Christians who follow the Julian calendar celebrated Easter on Sunday.

The Pope’s brief letter of Easter greetings was sent also to other Patriarchs of Eastern Churches, and was published on the Moscow Patriarchate’s website.

Pope Francis pointed out that humanity currently feels “the full weight of the suffering of our human family, crushed by violence, war, and so many injustices.”

Despite these sufferings, he wrote, “we still look with grateful hearts to the Lord who has taken upon Himself all the evil and pain of our world.”

“Christ’s death was the beginning of a new life and freedom from the bonds of sin and an occasion for our Easter joy, opening up to all the way from the shadow of darkness to the light of God’s kingdom.”

The Pope also invited Eastern Patriarchs to pray for one another and “bear credible witness to the Gospel message of the Risen Christ and the Church as the universal sacrament of salvation.”

In this way, he said, “all may enter into the kingdom of justice, peace, and joy in the Holy Spirit.” 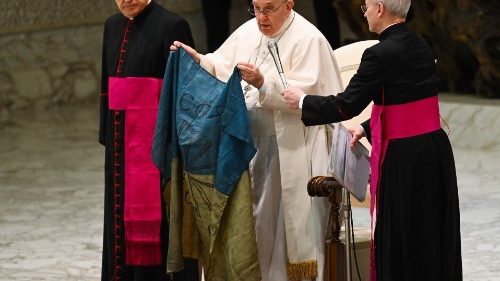 Pope to 'La Nacion': I am ready to do everything to stop the war

Pope to Russian Patriarch: 'Church uses language of Jesus, not of politics'

The Pope last spoke directly with Patriarch Kirill on 16 March in a video call focused on the war in Ukraine and the role of Christians to promote peace.

According to the Director of the Holy See Press Office, Matteo Bruni, Pope Francis urged the Russian Orthodox Patriarch to help “put out the fire” of the war in Ukraine, since those who “pay the highest price” are soldiers and civilians who die under the bombs.

In an interview with the Argentinian paper La Nacion last Friday, Pope Francis revealed that he had been scheduled to meet with Patriarch Kirill in Jerusalem in June, but added that the encounter had to be cancelled.

"I am sorry that the Vatican has had to cancel a second encounter with Patriarch Kirill, which we had scheduled for June in Jerusalem,” he said. “But our diplomacy maintained that a meeting between us in this moment could lead to much confusion."

The Pope and the Patriarch met in person in Havana, Cuba, in 2016 and signed a joint statement together.

Posted by Deacon Mike Talbot at 11:30 AM