Pope concerned about religious persecution that oppresses too many people 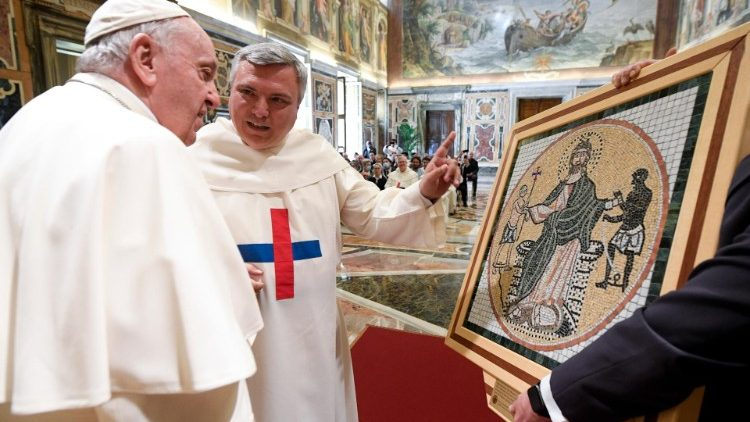 Pope: Too many people are still trapped in slavery

Pope Francis receives participants in the "International Trinitarian Solidarity“ conference in audience in the Vatican, and points to the dramatic reality of their charism that promotes action against religious persecution and solidarity with victims of slavery, oppression, exclusion, and persecution.

“Your charism is of flagrant actuality, unfortunately!" Pope Francis told members of “Trinitarian International Solidarity” gathered in the Vatican on Monday.

He said our time "boasts of having abolished slavery, when, in reality, there are too many men and women, even children, reduced to living in inhumane conditions, enslaved”

Trinitarian International Solidarity is an Order committed to incarnating the Trinitarian charism in the specific area of liberation on behalf of those, who because of their Christian faith, are reduced to slavery, oppression, exclusion, or persecution.

Its members, in Rome for a conference, operate across the globe in collaboration with like-minded organizations and the Institutes and Laity of the Trinitarian Family, promoting solidarity with those who are persecuted or enslaved favouring dialogue and tolerance.

Pope Francis thanked those present for their work and charism which defends religious freedom not in a theoretical way, but by taking care of people who are persecuted and imprisoned because of their faith, and at the same time, makes room for study and reflection, as witnessed by a course of studies run by them on religious freedom at the Angelicum University.

The Pope recalled the testimony of the Order’s founder, St. John de Matha, who “was called by Christ to give his life for the liberation of slaves, both Christian and Muslim.”

“He did not want to do this alone, individually, but founded for this purpose a new Order, an outgoing order, new also in its form of life, which was to be an apostolate in the world.”

Pope Francis reflected on how the charism of the Order stems from the message of Jesus’ first sermon in the synagogue of Nazareth, in which He proclaimed that the Spirit of the Lord was upon Him “to proclaim release to captives […] to set at liberty those who are oppressed.” (Lk 4:18; cf. Is 61:1-2).

This work, said the Pope, is prolonged in the mission of the whole Church. But in your Order it has found a singular, peculiar, I would say 'literal' expression - a bit like poverty in Francis - that is, the commitment to the ransom of slaves.”

He decried the “flagrant actuality” of this mission and the fact that there are so many men, women and children across the world who are still trapped in slavery and living in inhuman conditions, and he reflected on how, in too many instances and circumstances, religious freedom is violated and trampled upon, sometimes openly and others, hidden from sight.

Once, he noted speaking off-cuff,  there was a habit of dividing humanity into good and bad: "This country is good..." - "But it makes bombs!" - "No, it's good" - "And this is bad..."Today, he added, wickedness has pervaded people in all countries, and there is good and bad: “Wickedness, today, is everywhere, in all States. Even in the Vatican, perhaps!”

The Pope concluded encouraging those present to continue in their mission, also by collaborating with other institutions, ecclesial and otherwise, that share their noble purpose.

“But, please, work without losing your specificity: without "watering down" the charism.”

“May Our Lady and St. John de Matha,” he concluded, “always accompany the path of the Order and the service of Trinitarian International Solidarity.”

Posted by Deacon Mike Talbot at 5:39 AM