Ukraine: Mothers in Mariupol turn to Pope Francis for help

Cardinal Michael Czerny, interim Prefect of the Dicastery for Promoting Integral Human Development, conveys a letter addressed to Pope Francis by a group of women trapped in the Ukrainian city of Mariupol crying out for help.

As fighting continues to rage in besieged Mariupol, with Ukrainian soldiers still resisting in the Azovstal steel mill complex, Ukrainian authorities have announced they hope to resume evacuation efforts to bring some 6,000 civilians out of the war-torn port city on Wednesday.

Deputy Prime Minister Iryna Vereshchuk said in a statement there is a “preliminary” agreement to operate a so-called humanitarian corridor route towards the Ukraine-controlled city of Zaporizhzhia. It will apply to women, children, and older people from Wednesday afternoon, she said.

Home to 400,000 people before Russia’s invasion on 24 February, Mariupol has seen the worst fighting of the war. In seven weeks of siege and bombardments, the strategic port city on the Sea of Azov has been razed to the ground, with thousands of civilians killed, and an estimated 100,000 people  are still trapped with no food, electricity,  drinkable water, nor medicines for the injured.

Ukraine and Russia have frequently blamed each other for obstructing evacuations from the city or firing along the agreed route, which has typically only been open to people traveling using private vehicles.

In this dramatic situation, a group of Ukrainian women of Mariupol has addressed a letter to Pope Francis asking for his support, so that civilians and wounded soldiers can be evacuated.

The two-page letter signed by "the mothers, wives, and children of the defenders of Mariupol" was handed over by journalist Saken Aymurzaev of the Ukrainian state television "UATV-Channel” to Cardinal Michael Czerny, interim Prefect of the Dicastery for Promoting Integral Human Development.

Cardinal Czerny told Vatican Media that it “gives further evidence to what Pope Francis has been saying since the beginning” of the war, especially in the Urbi et Orbi Easter Message, "when he spoke clearly of the irrationality of total war."

“[ May there be peace for war-torn Ukraine, so sorely tried by the violence and destruction of the cruel and senseless war into which it was dragged. In this terrible night of suffering and death, may a new dawn of hope soon appear! Let there be a decision for peace. May there be an end to the flexing of muscles while people are suffering. Please, please, let us not get used to war! Let us all commit ourselves to imploring peace, from our balconies and in our streets! - Pope Francis]”

The mothers' letter recounts the sufferings and agony of the battered city which, the Ukrainian women say, has been “reduced to ashes” by weeks of relentless bombardments and has become the epicentre of “an unprecedented humanitarian catastrophe in 21st century Europe.”

The signatories note that this catastrophe once again raises the issue of the “inadmissibility” of the siege of cities involving "indiscriminate attacks", unjustified destruction, and unspeakable suffering for those who should be protected by the international humanitarian law. 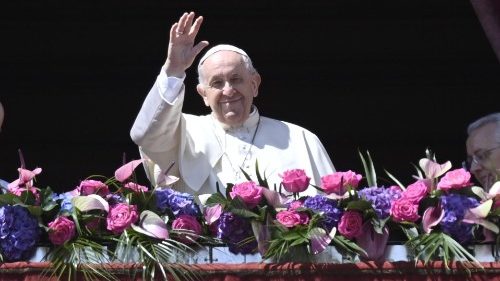 Pope at Easter Urbi et Orbi: May we be won over by the peace of Christ!

Still possible to help those suffering

The mothers therefore appeal for Pope Francis’ intervention so that civilians, as well as injured soldiers who cannot be treated, be allowed to evacuate from the city as soon as possible.

Despite the number of those dying increasing every day, “it is still possible to help those suffering”, the women of Mariupol write.

"This desperate petition is also addressed to all those who can help to open humanitarian corridors, with a ceasefire, which is exactly what the situation requires right now,“ Cardinal Czerny remarked.

In this moment, alongside the joy of the Resurrection, we must be able to bring "simultaneously the suffering and agony of our brothers and sisters in Ukraine and also of the many other places in the world where there is this terrible irrationality of war."

1,000 civilians in the Azovstal steel plant

The letter calls attention, in particular, to the some 1,000 civilians, mostly women and children, who have found refuge in the besieged Azovstal steel plant.

"At the beginning of the fighting these people thought that living with the military would give them not only security, but also an opportunity to receive food, water and medical care," the letter explains.

Instead, what seemed like a fortress has now become a "trap", where even "delivering food and drinking water" has become impossible.

Pope Francis’ help for the evacuation from Mariupol "will become a truly paternal act, the help of a good shepherd and a true act of mercy," concludes the letter of appeal written by the Ukrainian mothers

Posted by Deacon Mike Talbot at 9:26 AM