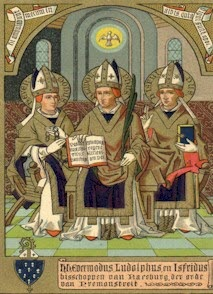 Ludolf was a Norbertine priest (a canon regular of the Premonstratensian Order). In 1236 he was chosen to become bishop of the German see of Ratzeburg. While fulfilling his episcopal duties, he continued the practices of his Norbertine religious life. For his courageous defense of the Church, he was imprisoned and harshly treated by Duke Albrecht of Saxony-Lauenburg. Subsequently he fell ill and died from what he had suffered. A soldier tormented by excruciating pains in his head resulting from an arrowhead that had become embedded in his flesh during battle invoked the intercession of Saint Ludolf. Soon afterward, he found that the arrowhead had shifted to the surface of his head wound, so that he was able to extricate it with his hand. In thanksgiving to God, the Blessed Virgin Mary, and Saint Ludolf, the soldier donated to the Church a lavishly decorated missal and several beautifully adorned liturgical vestments.