Saturday Saint of the Day; a martyr for the faith 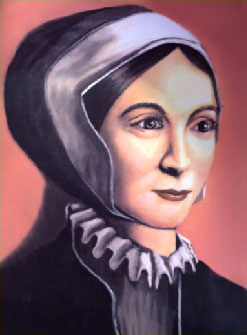 St. Margaret Clitherow was born in Middleton, England, in 1555, of protestant parents. Possessed of good looks and full of wit and merriment, she was a charming personality. In 1571, she married John Clitherow, a well-to-do grazier and butcher (to whom she bore two children), and a few years later entered the Catholic Church. Her zeal led her to harbor fugitive priests, for which she was arrested and imprisoned by hostile authorities. Recourse was had to every means in an attempt to make her deny her Faith, but the holy woman stood firm. Finally, she was condemned to be pressed to death on March 25, 1586. She was stretched out on the ground with a sharp rock on her back and crushed under a door over laden with unbearable weights. Her bones were broken and she died within fifteen minutes. The humanity and holiness of this servant of God can be readily glimpsed in her words to a friend when she learned of her condemnation: "The sheriffs have said that I am going to die this coming Friday; and I feel the weakness of my flesh which is troubled at this news, but my spirit rejoices greatly. For the love of God, pray for me and ask all good people to do likewise." Her feast day is March 26th.