Earlier today the Pope consecrated Russia and Ukraine, all humanity to the Immaculate Heart of Mary 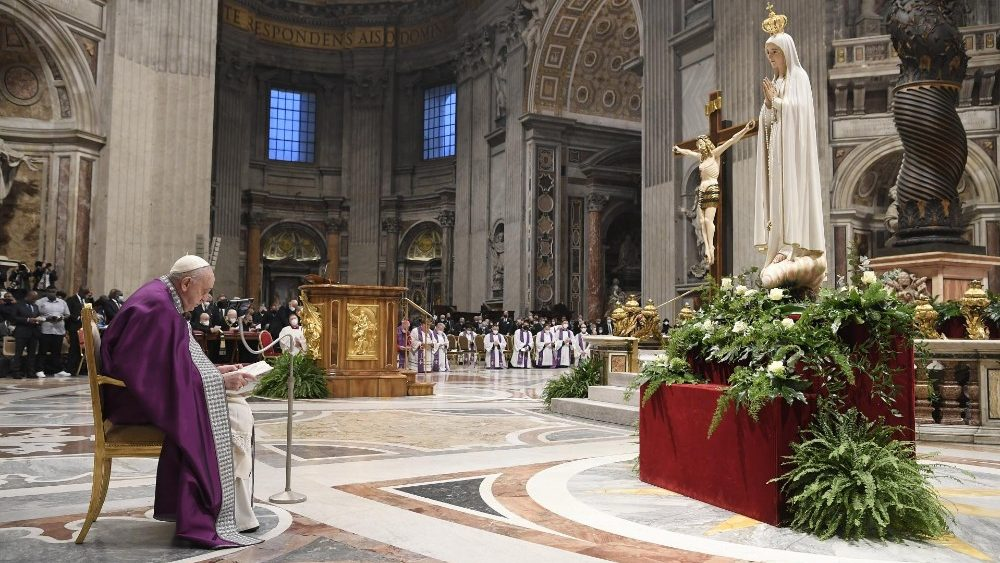 Pope Francis consecrates all humanity—especially Russia and Ukraine—to the Immaculate Heart of Mary, and says the act expresses our complete trust in the Virgin Mary in the midst of the “cruel and senseless war” in Ukraine.

Pope Francis presided over the annual “24 Hours for the Lord” Lenten penitential service in St. Peter’s Basilica on Friday evening, as the Church marked the feast of the Annunciation.

Toward the end of the liturgy, the Pope prayed the Act of Consecration of humanity, especially of Russia and Ukraine, to the Immaculate Heart of Mary.

He prayed the Act in communion with all Catholic Bishops across the globe, as the Papal Almoner, Cardinal Konrad Krajewski, did the same at the Shrine of Our Lady of Fatima, in Portugal.

The Pope’s renewal of the Consecration came in response to the war in Ukraine and at the request of the Blessed Virgin Mary made in an apparition at Fatima on 13 July 1917.

In his homily at the Celebration of Penance, Pope Francis reflected on humanity’s need for God’s forgiveness and on the meaning of the Consecration.

He said the renewal of the Act of Consecration is meant to consecrate the Church and all the whole of humanity, especially Russia and Ukraine, to Mary’s Immaculate Heart.

“This is no magic formula but a spiritual act. It is an act of complete trust on the part of children who, amid the tribulation of this cruel and senseless war that threatens our world, turn to their Mother, reposing all their fears and pain in her heart and abandoning themselves to her.”

The Pope added that we place all that we have and are into “pure and undefiled heart, where God is mirrored.”

Helplessness in face of vicious war

Pope Francis lamented the “vicious war” in Ukraine, which has killed many and caused immense suffering.

“In these days, news reports and scenes of death continue to enter our homes, even as bombs are destroying the homes of many of our defenceless Ukrainian brothers and sisters.”

The war, added the Pope, reminds us of our “helplessness and our inadequacy”, as well as of our need for the “closeness of God and the certainty of His forgiveness.”

God alone, he said, can eliminate evil, disarm resentment, and restore peace to our hearts.

Pope Francis recalled that God chose the Virgin Mary to change history by beginning a new story of “salvation and peace.”

“If we want the world to change, then first our hearts must change.”

The Pope went on to reflect on Mary’s encounter with the angel Gabriel at the Annunciation, in which God invites her to become the mother of the Son of God. 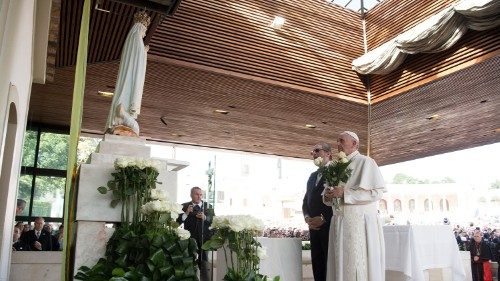 Pope to Bishops: Consecration of Russia and Ukraine ‘to implore peace’

The angel Gabriel gave Mary the only true reason for joy, said the Pope, with his words that “the Lord is with you.”

Pope Francis said Catholics experience something similar in the Sacrament of Reconciliation, since God draws near to us when we present ourselves with humble, repentant hearts.

Confession is the “sacrament of joy,” he said. “The Lord enters our home, as he did that of Mary in Nazareth, and brings us unexpected amazement and joy.”

The Pope also urged priests to always express God’s forgiveness in Confession, and never project an air of rigidity or harshness.

“If a priest doesn’t possess this attitude with the proper sentiments in his heart,” he said, “then it would be better he not act as a confessor.”

Pope Francis also said the angel Gabriel tells Mary: “Do not be afraid.”

God, he added, already knows our weaknesses and failures, but that He invites us to lay them at His feet in the person of the priest when we receive the Sacrament of Reconciliation.

Our weaknesses can then become “opportunities for resurrection.”

Mary, in turn, now invites us to return to the source of our life, to the Lord, “who is the ultimate remedy against fear and emptiness in life.”

Pope Francis concluded that Mary’s response to God’s invitation was “a lively desire to obey God”.

“May she now take our own journey into her hands. May she guide our steps through the steep and arduous paths of fraternity and dialogue, along the way of peace.”