Opinion: Synod on Synodality must not follow problems from Germany's Synodal Path

A NOTE FROM OUR PUBLISHER: As the Church sets out on the global Synod on Synodality called by Pope Francis, it would do well to avoid taking the same route as Germany’s horrendous ‘Synodal Path.’ 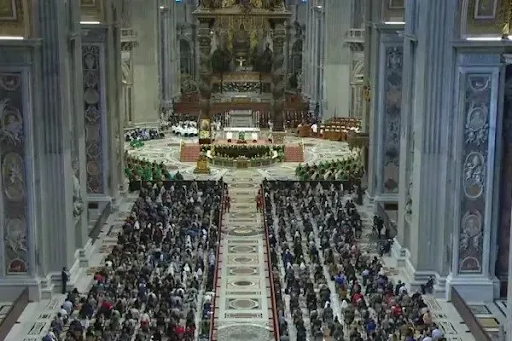 As the two-year Synod on Synodality process commences, it’s imperative that Catholics collectively reflect on what synodality truly means, why it’s important and what Pope Francis is aiming for by inaugurating this particular synodal process.

An authentically Catholic understanding of the purpose and scope of synodality and proper participation based on that end is crucial in order for the Church to steer clear of the very real perils that could be associated with it. Those perils are on public display via the deeply disturbing developments that continue to arise from the Church in Germany’s ill-considered “Synodal Path” process, which, under the guise of addressing clerical sexual abuse, has sought to change Catholic teaching on sexuality, the exercise of power and the nature of the sacraments.

Historically, the early Church synods — the word “synod” is derived from a Greek word that traditionally has meant a gathering or council but that has also been interpreted as “to journey together” — referred to the councils of bishops that, under the pope’s authority, were convened to address important matters that affected the entire body of Christian believers. In later centuries a different kind of synod also began to take place at the diocesan level, with the term applying to local gatherings commissioned by bishops to craft policies regarding the pastoral care of their individual flocks. Such local synods, of course, have never had the slightest authority over Catholic doctrine, as the German synod takes aim to do.

It’s critical to understand that, in both cases, synods have never been able to take actions on their own. The explicit approval of the pope has always been required to put into effect the results of the synod of bishops, and the relevant local bishop has the explicit authority in the case of diocesan synods for implementing the work of a synodal process within his diocese as long as the outcomes further the unity of the universal Church.

In the last 50 years, synods have had increased relevance ever since Pope St. Paul VI instituted a permanent Synod of Bishops for the purpose of helping to renew the Church in order to evangelize more effectively in the contemporary world. He specifically proclaimed it would be an advisory body that would fall “immediately and directly” under papal authority.

In the years since the Second Vatican Council, Popes St. Paul VI, St. John Paul II, Benedict XVI and now Francis have all convened specific assemblies of the Synod of Bishops in order to collect advice from a representative sampling of the world’s bishops with respect to important issues that these popes requested they consider.

This time, the important issue the Holy Father has chosen to focus the Church on is synodality itself — that is, reflecting upon the very process of what it means to journey together as the People of God.

The Holy Father has communicated throughout his papacy the priority he gives to enhancing the Church’s synodal nature. One reason is to combat some of the problems he has identified as seriously impairing the Church’s evangelical witness.

But while such specific objectives are involved, they are secondary to his more fundamental intention in advocating for a synodal Church that is ready to “encounter, listen and discern.”

Those are themes Pope Francis expounded on when he opened the synod, titled “For a Synodal Church: Communion, Participation and Mission,” at an Oct. 10 Mass in St. Peter’s Basilica. The papal liturgy launched a two-year process that first takes place on the diocesan level across the globe. Bishops in their respective local Churches celebrated liturgies on Oct. 17 to open the synod’s diocesan phase. Next October, the continental phase will involve episcopal conferences, and the following year the process will culminate with the gathering of the XVI Ordinary General Assembly of the Synod of Bishops in Rome.

Through this synodal process the Pope is highlighting synodality as a fundamental priority in hopes of broadening the avenue through which the Holy Spirit works in the life of the institutional Church, in the lives of all the faithful and indeed in the lives of all humanity.

While there is plenty of potential promise in this global process, there are potential pitfalls. One is a shortage of preparation time. Because the synod process was announced only a few months ago, and its background documents were released only a month ahead of the Oct. 10 kickoff of the opening diocesan level of synodal discussions, dioceses in the U.S. are still scrambling to organize their local synodal processes. This difficulty is compounded by the fact that the dioceses already are badly overtaxed by the challenges posed by the COVID-19 pandemic.

There is also the reality that there are always dangers associated with inviting an extremely broad discussion on a topic that hasn’t clearly been defined beforehand. The biggest danger here comes from those forces within the Church that, since the close of the Second Vatican Council, have falsely claimed the Council Fathers intended to rework the most basic elements of Catholic teaching and of the Church’s structure, conforming them to “progressive” contemporary political and social agendas rather than to Jesus’ unchanging Gospel message of salvation of souls.

This brings us to Germany’s current “Synodal Path” discussions. Here, the false “hermeneutic of discontinuity and rupture,” as it has been characterized by Pope Benedict XVI, is in complete control. While the German process ostensibly was organized to respond to the sexual-abuse scandal, its organizers actually want to utilize the crisis to institutionalize dissenting agendas that the German Church’s dominant progressive wing has pursued for decades. These agendas include endorsement of divorce, contraception and homosexual behavior; the ordination of women; the ending of mandatory celibacy for priests; and “democratizing” the Church’s hierarchical structure to strip away the authority of bishops and priests.

Moreover, the ambitions of the German Synodal Path’s organizers extend far beyond Germany. It’s their fervent hope that immediately after their agendas are entrenched at the national level, they will be exported to the global Church via various mechanisms, beginning with the Synod on Synodality.

Because the German Synodal Path’s problematic ambitions have been so transparent, Church leaders in Rome have requested repeatedly that it change course. Most notably, Pope Francis himself penned a letter to the German Church in June of 2019, advising their focus should be on evangelization in the face of the “erosion” and “decline of faith” in their country and warning against “temptations” that can lead to “a complicated series of arguments, analyses and solutions with no other effect than to stay away from the real and daily encounter with the faithful people and the Lord.”

Unswayed by this papal intervention, or by multiple subsequent attempts at correction by other senior Vatican officials, the German “Synodal Path” continues to press forward with its potentially schismatic demands for radical reforms that dissent from foundational Catholic doctrine and undermine Catholic ecclesiology.

In light of these events across the Atlantic, it’s incumbent that faithful Catholics here in the U.S. make our voices heard in the Synod on Synodality discussions and to help avoid any efforts to co-opt them like Germany’s disastrous course.

In this regard, we can heed a very timely message from Bishop Thomas Tobin of Providence, Rhode Island. “While we are urged to be a ‘listening Church,’ it’s a good time to recall that Jesus commissioned us first of all to be a preaching, teaching Church,” he tweeted Oct. 11 as the synodal process got underway. “We discern the signs of the times, and then we preach and teach the unchanging truth of Christ the world always needs to hear.”

Bishop Tobin’s wise words sum up what the Holy Spirit really wants from us, as faithful Catholics who love our Church.

Posted by Deacon Mike Talbot at 10:19 AM