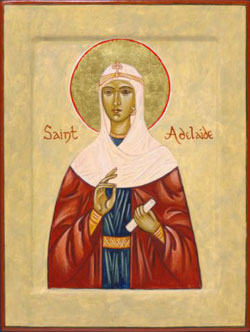 Born c. 931 in Burgandy, St. Adelaide married, at 15 or 16, Lothair of Italy to whom her father had engaged her when she was two. When Lothair died three years later, his successor and usurper Berengar of Ivrea imprisoned Adelaide and attempted to force her to marry his son. Legends tell of Adelaide's escape to Canossa, where she appealed to Otto of Germany for help. He conquered Italy and married her in 951. John XII crowned the pair rulers of the Holy Roman Empire the following year. After Otto's death in 973, Adelaide quarrelled with Otto II, possibly at the instigation of her daughter-in-law, Theophano, and lived with her brother in Burgandy. She established many monasteries and churches; she also became interested in evangelism. She and her son reconciled before his death in 983, and she became regent for her grandson, Otto III. Adelaide died in 999 at the convert at Seltz, which she had founded. Cluny became the center of her cult. She was canonized in 1097.