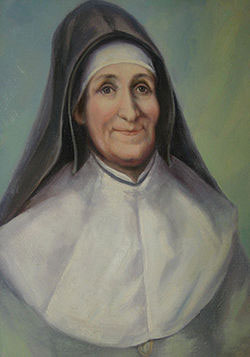 St. Julie (Julia) Billiart was born in 1751 and died in 1816. As a child, playing "school" was Julie's favorite game. When she was sixteen, to help support her family, she began to teach "for real". She sat on a haystack during the noon recess and told the biblical parables to the workers. Julie carried on this mission of teaching throughout her life, and the Congregation she founded continues her work.
Julie was the fifth of seven children. She attended a little one room school in Cuvilly. She enjoyed all of her studies, but she was particularly attracted to the religion lessons taught by the parish priest. Recognizing something "special" in Julie, the priest secretly allowed her to make her First Communion at the age of nine, when the normal age at that time, was thirteen. She learned to make short mental prayers and to develop a great love for Jesus in the Eucharist.
A murder attempt on her father shocked her nervous system badly. A period of extremely poor heath for Julie began, and was to last for thirty years. For twenty-two of these years she was completely paralyzed. All of her sufferings and pain she offered up to God.
When the French Revolution broke out, Julie offered her home as a hiding place for loyal priests. Because of this, Julie became a hunted prey. Five times in three years she was forced to flee in secret to avoid compromising her friends who were hiding her.
At this time she was privileged to receive a vision. She saw her crucified Lord surrounded by a large group of religious women dressed in a habit she had never seen before. An inner voice told her that these would be her daughters and that she would begin an institute for the Christian education of young girls. She and a rich young woman founded the Sisters of Notre Dame de Namur.
At Amiens, the two women and a few companions began living a religious life in 1803. In 1804, Julie was miraculously cured of her illness and walked for the first time in twenty-two years. In 1805, Julie and three companions made their profession and took their final vows. She was elected as Mother General of the young Congregation.
In 1815, Mother taxed her ever poor health by nursing the wounded and feeding the starving left from the battle of Waterloo. For the last three months of her life, she again suffered much. She died peacefully on April 8, 1816 at 64 years of age. Julie was beatified on May 13, 1906, and was canonized by Pope Paul VI in 1969. Her feast day is April 8th.