50 years later a look back on Missale Romanum, the Novus Ordo and the resulting reactions

We are very grateful indeed to Dom Alcuin Reid OSB for sharing with NLM this article, marking the 50th anniversary of the Apostolic Constitution Missale Romanum, by which Pope Paul VI first promulgated the Novus Ordo Missae. Dom Alcuin is the founding Prior of the Monastère Saint-Benoît (www.msb-lgf.org) in the diocese of Fréjus-Toulon, France and the International Coordinator of the ‘Sacra Liturgia’ initiatives. This article draws from his paper “On the Council Floor: The Council Fathers’ Debate of the Schema on the Sacred Liturgy” published in U.M. Lang (ed.) ‘Authentic Liturgical Renewal in Contemporary Perspective’ (Bloomsbury, 2017). 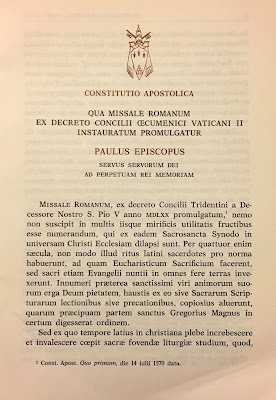 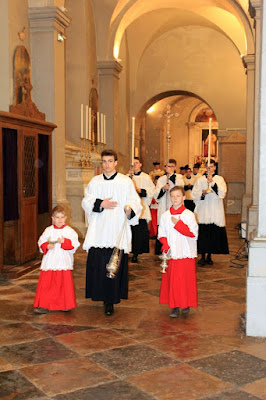 Certainly, 50 years after its promulgation, there is no sign that the Ordo Missae of Paul VI is going anywhere any time soon. And even if it is an inorganic development and a disproportionate reform held in place by an extraordinary act of legal positivism, when celebrated according to the mind of the Church and in a spirit of continuity with liturgical tradition, it is nevertheless something valid and is a good. Half a century has given it its place in the life of the Church—though not as exclusively as those who constructed it and who imposed it would have liked. After all, the Church has room for “treasures both old and new” (Matt. 13, 52). The next 50 years shall no doubt bring some clarity in what is still, at times, an altogether too sensitive question for some clergy and laity to consider dispassionately, if at all. But this difficulty will pass. What liturgists shall write for the centenary in 2069 remains to be seen. Our task today is, surely, to be as honest and objective as we can about the issues at hand, and to do what we can to ensure the real and optimal participation of all of Christ’s faithful in the “primary and indispensable source from which all the faithful are to derive the true Christian spirit” (Sacrosanctum Concilium 14, citing St Pius X) that the Sacred Liturgy in fact is, through its optimal celebration in all circumstances. And if we find that the older rites are more efficacious in so doing, let us not fear—for it is the ultimate end (the salvation of souls) that Paul VI had in view 50 years ago that are of importance still, not his prudential decisions in respect of particular rites, whatever merit or not they may have had then or now.