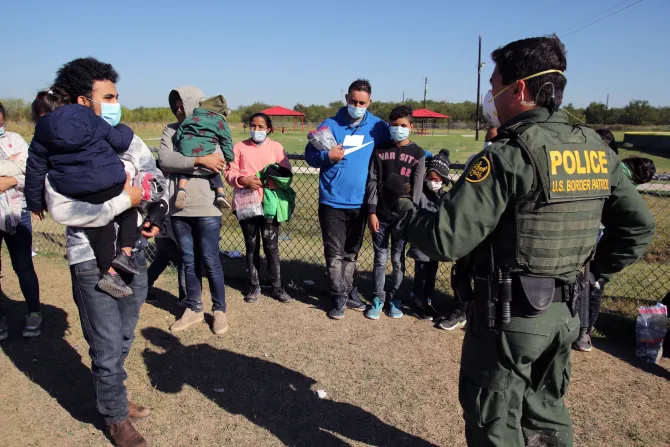 On the eve of President Joe Biden’s scheduled Sunday visit to the U.S.-Mexico border to meet with local officials and border enforcement agents, the U.S. Catholic bishops announced their opposition to the administration’s recent crackdown on illegal immigration to the United States.

“We urge the administration to reverse its present course in favor of humane solutions that recognize the God-given dignity of migrants and provide equitable access to immigration and humanitarian pathways,” the statement said.

Biden announced Thursday that the U.S. will step up enforcement at the border and begin to turn away Cubans, Nicaraguans, and Haitians who try to cross the U.S.-Mexico border illegally.

The new rules would also allow up to 30,000 people to come into the U.S. each month from Cuba, Nicaragua, and Haiti. Migrants would be able to come for two years and receive work authorization, provided they have an eligible sponsor and can pass vetting and background checks.

In October the Biden administration implemented a similar process for immigrants from Venezuela that led to a dramatic drop in the number of people crossing the border from that country.

In his statement, Bishop Seitz declared the bishops’ opposition to the new rules on the grounds that those fleeing violence have a right to seek safety in the U.S.

“We welcome the announcement of new legal pathways to the United States, but it is difficult for us to consider this progress when these same pathways are contingent on preventing those forced to flee their native land from availing themselves of the right to seek asylum at our border,” the statement read.

“Under this approach, many of the most vulnerable will be excluded from relief and subjected to dangerous circumstances, contravening U.S. and international refugee law, as well as Catholic social teaching,” Seitz wrote.

“This is a drastic departure from the administration’s promise to create a ‘fair, orderly, and humane’ immigration system and will only exacerbate challenges on both sides of our border.”

Biden will visit the U.S.-Mexico border on Sunday, where he is scheduled to meet with border enforcement officials in El Paso. He will also meet with the El Paso County Migrant Services Center and nonprofits and religious groups that serve migrants, CBS News reported Sunday.

There were more than 2.38 million migrant stops on the border in the fiscal year ending Sept. 30, the Associated Press reported. This was the first time the number of stops exceeded 2 million.

At the announcement of his administration’s immigration policy changes, Biden addressed those considering migrating to the U.S.

“Do not just show up at the border. Stay where you are and apply legally from there,” the president said in Thursday remarks to reporters. He said the changes “aren’t going to fix our entire immigration system, but they can help us a good deal in better managing what is a difficult challenge.”

Homeland Security officials will begin denying asylum to those who avoid the legal process and do not first seek asylum in the country they traveled through. Migrants returned to Mexico under the new rules will not be eligible to request asylum in the U.S. for five years, the New York Times reported.

​​The Biden administration ended the Trump administration’s “Remain-in-Mexico” Policy, which required asylum seekers to stay in Mexico until their claims could be heard in U.S. court. Many of these migrants were forced to wait in unsanitary and unsafe camps near the border.

In March 2020 the Trump administration introduced immigration restrictions known as Title 42 as a public health measure amid the COVID-19 pandemic. The policy allows U.S. border agents to immediately expel those attempting to cross the border. The Biden administration announced Thursday that it will use Title 42 in its crackdown on illegal immigrants.

Of the 2.2 million migrants stopped at the southern border in 2022, one million were turned away using Title 42, CBS reported. In April 2022, the Centers for Disease Control and Prevention (CDC) announced that it would no longer authorize Title 42. The issue is now stuck in the courts after a U.S. Supreme Court ruling in December suspending a lower court’s order to end the policy.

Kevin Jones contributed to this report.