The Office for the Liturgical Celebrations of the Supreme Pontiff publishes the calendar of solemn liturgies at which Pope Francis will preside in coming weeks, which include the Sunday of the Word of God and several Masses in the Democratic Republic of Congo and South Sudan.

The Vatican’s Office for the Liturgical Celebrations of the Supreme Pontiff has released the Pope’s liturgical schedule for the rest of January and the beginning of February.

On Sunday, 22 January – the Third Sunday of Ordinary Time – Pope Francis will celebrate Holy Mass in St Peter’s Basilica to mark the Sunday of the Word of God.

Three days later, on 25 January, the Holy Father marks the Solemnity of the Conversion of St Paul the Apostle by celebrating Second Vespers for the Feast in the Basilica of St Paul Outside-the-Walls.

The Solemnity concludes the Week of Prayer for Christian Unity, and the ecumenical Vespers ceremony in St Paul’s includes the participation of representatives of various other Christian churches and ecclesial communities. 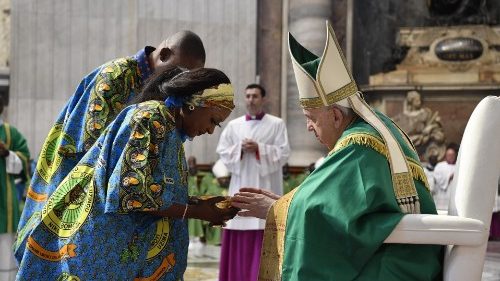 Pope to travel to DRC and South Sudan in early 2023

Liturgical celebrations during the Apostolic Journey to Africa

On the last day of the month, Pope Francis will begin his Apostolic Journey to the Democratic Republic of Congo and to South Sudan, which will conclude on 5 February.

During the Journey, the Pope will preside at a number of liturgical ceremonies, beginning with Holy Mass celebrated at Ndolo Airport in Kinshasha on 1 February, the beginning of his first full day in DR Congo.

The following day, 2 February, the Holy Father will take part in a Prayer Meeting with priests, deacons, and seminarians, as well as men and women religious, in the Cathedral of Notre Dame du Congo.

After travelling to Juba, South Sudan, the Pope will take part in an Ecumenical Prayer service on 4 February with the Archbishop of Canterbury and the Moderator of the General Assembly of the Church of Scotland, which will take place at the John Garang Mausoleum in Juba.

The following day, 5 February, Pope Francis will return to the John Garang Mausoleum, where he will preside at Holy Mass, the final liturgy and the final major event on his Apostolic Journey.