Tomb of Benedict XVI open to the public starting Sunday

Work on the Pope Emeritus Benedict XVI’s final resting place in the crypt under St. Peter’s Basilica is completed and the site will be open to visitors from Sunday, 8 January.

Starting in the morning of Sunday, 8 January, the tomb of Pope Emeritus Benedict XVI can be visited in the Vatican Grottoes, beneath St. Peter’s Basilica.

A communiqué from the Holy See Press Office said the public will be able to enter the area from 9 am CET.

The triple coffin made of cypress, zinc and oak, with the body of the Pope emeritus, was buried in the former tomb of Pope St. John Paul II, on 5 January following the celebration of a Requiem Mass presided over by Pope Francis. 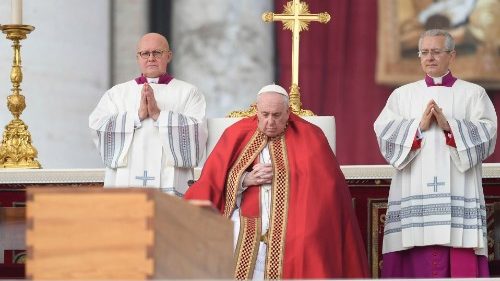 Pope Francis at Requiem Mass: 'Benedict, may your joy now be complete!'

The remains of Pope St. John Paul II were brought up into the Basilica, and placed in the Chapel of Saint Sebastian, after his beatification in 2011.

Inside Benedict XVI’s coffin, the coins and medals minted in the Vatican during his pontificate were placed as well as the palliums he wore and a metal cylinder containing a “deed” of his life and pontificate.

The name of the 265th Successor of Peter is engraved on a white marble slab.