Together - in fraternity and solidarity to address multiple world crises

Pope Francis sends a message to participants in the Fifth International Conference for World Balance organized in Cuba under the auspices of UNESCO, reiterating that the current multiple crises facing the world today can only be addressed together in fraternity and solidarity.

In a time of global political and social crises, our interconnected world needs more than ever today “to build bridges that can help us find viable solutions together that do not exclude anyone”.

Pope Francis reiterated this stance in a message addressed on Tuesday to participants at the Fifth International Conference for World Balance, gathered in La Habana, Cuba,  from 24-28 January to discuss the current pressing international issues and challenges threatening world peace in the wake of the COVID-19 pandemic.

The conference brings together, every three years, world thinkers, political and religious leaders, journalists, educators, writers, and, scientists, to discuss issues of peace and social justice.

It is convened by the “José Martí Project for World Solidarity”, a Cuban think-tank named after the Cuban thinker and national hero José Martí, which has been organizing the event since 2003 under the auspices of the UNESCO and other international organizations. This year’s event commemorates the 170th birth of José Martí reflecting on his legacy today.

Listening to others and learning from our elders

In his message Pope Francis insists that changes to the current world situation can be achieved only though dialogue and fraternity and “listening to others”.

He further remarks that the ability to improve our world also comes from learning from those who came before us. Recalling the respect José Martí had for another Cuban patriot that preceded him, Venerable Father Félix Varela, Pope Francis notes that his admiration for the Cuban priest’s courage in denouncing injustice and his meek respect for others “shows the importance of not denying our roots, which allow us to learn from our elders”.

“Our roots lead us to learn from the faith (of our elders), the coherence of life that this faith imposed on them, and from their dedication to people that it is nothing else than the Lord's commandment to love us as He has loved us.” 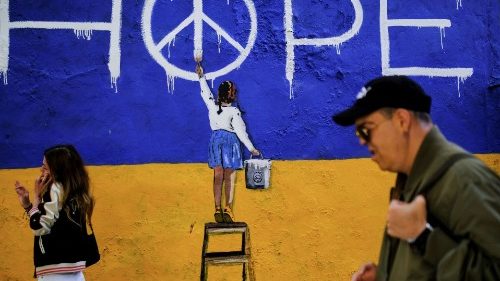 Pope's World Peace Day message: There is light even in our darkest hour

Current interconnected crisis can only be addressed together

Pope Francis therefore reiterates the need to “restore the word ‘together’ to a central place”. It is “together in fraternity and solidarity – he says, citing his Message for this Year’s World Day for Peace - , that we build peace, ensure justice and emerge from the greatest disasters”, as shown by “heroic” efforts made by all those people who worked tirelessly to help everyone emerge from COVID-19 crisis.

“This – the Pope concludes - is the key to recovering the balance that gives your meeting its name, because only together we can address the several moral, social, political and economic crises we are enduring  and that are all interconnected”.

Posted by Deacon Mike Talbot at 9:41 AM