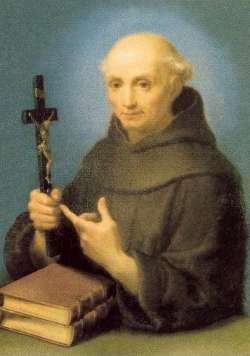 Born in Cori (Latina) on June 4, 1655, Thomas knew a childhood marked by the premature loss first of his mother and then of his father, thus being left alone at the age of 14 to look after his younger sister. Shepherding sheep, he learned wisdom from the simplest things. Once his sister was married, the youth was free to follow the inspiration that for some years he had kept in the silence of his heart: to belong completely to God in the Religious Life of a Franciscan. He had been able to get to know the Friars Minor in his own village at St. Francis convent. Once his two sisters were settled in good marriages and he was rendered free of all other preoccupations, he was received into the Order and sent to Orvieto (PG) to fulfill his novitiate year. After professing his vows according to the Rule of St. Francis and completing his theological studies, he was ordained to the priesthood in 1683. He was immediately nominated vice master of novices at Holy Trinity convent in Orvieto, since his superior recognized at once his gifts.

After a short time, Fr. Thomas heard of the hermitages that were beginning to bloom in the Order and the intention of the superiors of the Roman Province to inaugurate one at the convent at Civitella (today Bellegra). His request was accepted, and the young friar thus knocked at the door of the poor convent in 1684, saying, "I am Fr. Thomas of Cori, and I come here to become

From then, Fr. Thomas lived at Bellegra until death, with the exception of six years in which he was Guardian at the convent of Palombara, where he initiated the Hermitage modeled after the one at Bellegra. He wrote the Rule first for one and then for the other, observing it scrupulously aid consolidating by word and example the new institution of the two Hermitages.

The long years spent at Saint Francis of Bellegra can be summed up in three points:

St. Thomas of Cori was surely - as is said of St. Francis - not so much a man who prayed as a man who became prayer. This dimension animated the entire life of the founder of the Hermitage. The most evident aspect of his spiritual life was undoubtedly the centrality of the Eucharist, as attested by St. Thomas in his celebration of the Eucharist, which was intense and attentive, and in the silent prayer of adoration during the long nights at the Hermitage after the Divine Office, celebrated at midnight. His life of prayer was marked by a persistent aridity of spirit. The total absence of sensible consolation in prayer and in his life of union with God was protracted for a good 40 years, finding him always serene and total in living the primacy of God. Truly, his prayer was configured as a remembrance of God that made concretely possible a unity of life, notwithstanding his manifold activities.

St. Thomas did not close himself up in the Hermitage, forgetting the good of his brothers and sisters, and the heart of the Franciscan vocation, which is apostolic. He was called with good reason the Apostle of Sublacense (the Subiaco region), having crossed the territory and its villages with the indefatigable proclamation of the Gospel, in the administration of the sacraments and the flowering of miracles at his passage, a sign of the presence and nearness of the Kingdom. His preaching was clear and simple, convincing and strong. He did not climb the most illustrious pulpits of his time; his personality was able to give its best in an ambit restricted to our territory, living his Franciscan vocation in littleness and in the concrete choice of the poorest.

St. Thomas of Cori was to his brothers a very gentle father. In face of the resistance of some brothers before his will to reform and his radicality in living the Franciscan ideal, the Saint knew how to respond with patience and humility, even finding himself alone to mind the convent. He had understood well that every true reform initiates itself.

The considerable correspondence that is here annexed demonstrates St. Thomas' attention to the smallest expectations and needs of his Friars, and of numerous friends, penitents and Friars who turned to him for his counsel. In the convent, he demonstrated his spirit of charity in his availability for every necessity, even the most humble.

Rich in merits, he fell asleep in the Lord on January 11, 1729. St. Thomas of Cori shines among us and in Rome, of which he is the co-patron, above all in his thirst for a Christian and Franciscan ideal that is pure and lived in its essentials. A provocation for all of us not to take lightly the Gospel and its all-encompassing exigencies.