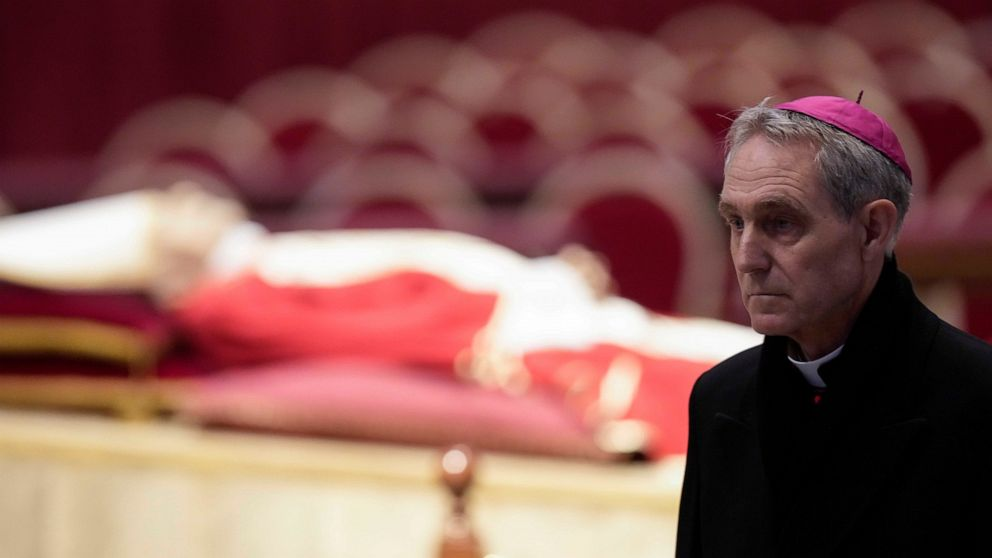 The body of late Pope Emeritus Benedict XVI laid out in state as father Georg Gaenswein stands on the right inside St. Peter's Basilica at The Vatican, Monday, Jan. 2, 2023. Benedict XVI, the German theologian who will be remembered as the first pope in 600 years to resign, has died, the Vatican announced Saturday. He was 95. (AP Photo/Andrew Medichini)
The Associated Press

VATICAN CITY -- Pope Emeritus Benedict XVI’s longtime personal secretary has written a tell-all book that his publisher on Monday promised would tell the truth about the “blatant calumnies,” “dark maneuvers,” mysteries and scandals that sullied the reputation of a pontiff best known for his historic resignation.

Archbishop Georg Gaenswein’s “Nothing but the Truth: My Life Beside Pope Benedict XVI” is being published this month by the Piemme imprint of Italian publishing giant Mondadori, according to a press release.

Benedict died Saturday at age 95 and his body was put on display Monday in St. Peter’s Basilica ahead of a Thursday funeral to be celebrated by his successor, Pope Francis.

Gaenswein, a 66-year-old German priest, stood by Benedict’s side for nearly three decades, first as an official working for then-Cardinal Joseph Ratzinger in the Congregation for the Doctrine of the Faith, then starting in 2003 as Ratzinger’s personal secretary.

Gaenswein followed his boss to the Apostolic Palace as secretary when Ratzinger was elected pope in 2005. And in one of the most memorable images of Benedict’s final day as pope Feb. 28, 2013, Gaenswein wept as he accompanied Benedict through the frescoed halls of the Vatican, saying goodbye.

He remained Benedict’s gatekeeper, confidant and protector during a decade-long retirement, while also serving until recently as the prefect of Francis’ papal household. It was Gaenswein who performed the anointing of the sick last Wednesday, when Benedict’s health deteriorated, and it was he who called Francis on Saturday to tell him that Benedict had died.

According to Piemme, Gaenswein’s book contains “a personal testimony about the greatness of a mild man, a fine scholar, a cardinal and a pope who made the history of our time.” But it said the book also contained a first-hand account that would correct some “misunderstood” aspects of the pontificate as well as the machinations of the Vatican.

“Today, after the death of the pope emeritus, the time has come for the current prefect of the papal household to tell his own truth about the blatant calumnies and dark maneuvers that have tried in vain to cast shadows on the German pontiff’s magisterium and actions,” the press release said.

Gaenswein’s account would “finally make known the true face of one of the greatest protagonists of recent decades, too often unjustly denigrated by critics as ‘Panzerkardinal’ or ‘God’s Rottweiler,’” it said, referring to some common media nicknames for the German known for his conservative, doctrinaire bent.

Specifically, the publisher said Gaenswein would address the “Vatileaks” scandal, in which Benedict’s own butler leaked his personal correspondence to a journalist, as well as clergy sex abuse scandals and one of the enduring mysteries of the Vatican, the 1983 disappearance of the 15-year-old daughter of a Vatican employee, Emanuela Orlandi.

The book appears to be just part of what is shaping up as a postmortem media blitz by Gaenswein, including the release Monday of excerpts of a lengthy interview he granted Italian state RAI television last month that is to be broadcast Thursday after the funeral.

According to the excerpts published by La Repubblica newspaper, Gaenswein recounted how he tried to dissuade Benedict from resigning after the then-pope told him in late September 2012 that he had made up his mind. That was six months after Benedict took a nighttime fall during a visit to Mexico and determined he no longer could handle the rigors of the job.

“He told me: ‘You can imagine I have thought long and hard about this, I’ve reflected, I’ve prayed, I’ve struggled. And now I’m communicating to you that a decision has been taken, it’s not up for discussion,’” Gaenswein recalled Benedict saying.

Gaenswein also referred to the struggles, scandals and problems Benedict faced during his eight-year pontificate, recalling he had asked for prayers at the start to protect him from the “wolves” who were out to get him. Gaenswein cited in particular the “Vatileaks” betrayal, which resulted in the butler being convicted by the Vatican tribunal, only to be pardoned by the pope two months before his resignation.

“Anyone who thinks there can be a calm papacy has got the wrong profession,” he said.

Posted by Deacon Mike Talbot at 11:49 AM