Ahead of his funeral on Thursday, the body of Pope Emeritus Benedict XVI lies in state in St Peter's Basilica, where the faithful can pay their final respects and to offer their prayers for the repose of the soul of the late Joseph Ratzinger.

The mortal remains of Pope Emeritus Benedict XVI have been transferred to the Basilica of Saint Peter, will they will lay in state for three days to offer the faithful an opportunity for prayer and to pay their final respects to the former Supreme Pontiff.

The Pope Emeritus’ body – resting in front of the Altar of the Confession – is vested in traditional red liturgical garments with a miter, but without the pallium (the latter a symbol of jurisdiction which is normally not used for a retired prelate). A simple Rosary is held in his interlaced fingers. 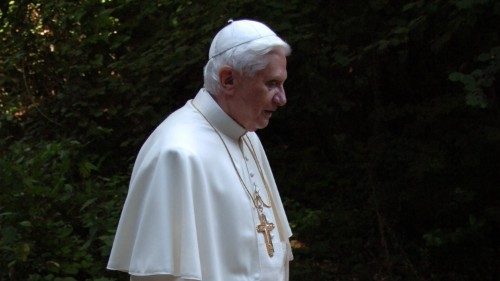 On Monday morning, the Pope Emeritus’ remains were translated from the Monastery to the Basilica in a private ceremony.

A long line of the faithful and other well-wishers had already formed early Monday morning before the viewing officially began at 9 am Rome time.

Prior to the translation to the Basilica, close friends, associates, and coworkers were able to view the body in the Mater Ecclesiae Monastery, where the Pope Emeritus spent the final years of his life.

The exposition of the body will continue through Wednesday, with the Basilica open to the faithful from 9 am to 7 pm on Monday, and from 7 am to 7 pm on Tuesday and Wednesday.

On Thursday, Pope Francis will become the first Pope in modern history to preside as Pope at the funeral of his predecessor. The Requiem Mass is set to take place Thursday morning in St Peter’s Square, beginning at 9:30 am Rome time.

In accordance with the wishes of the late Pope Emeritus, the funeral and the accompanying rites and ceremonies will be marked by the same simplicity that characterized the life of this “humble servant in the Lord’s vineyard.”

Posted by Deacon Mike Talbot at 9:29 AM