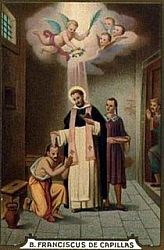 Francis Ferdinand de Capillas(true name in Spanish: Francisco Fernández de Capillas) O.P. (1607-1648) was a Castilian Christian missionary to China. He was the first Roman Catholic martyr killed in China. He was beatified by Pope Pius X in 1909, and canonized by Pope John Paul II in 2000 as the protomartyr of the 134 Martyrs of China.